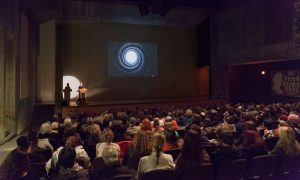 Urban Video Project and Light Work are pleased to announce the exhibition of table (2013-2014), a new piece by celebrated multimedia artist, Ann Hamilton, at UVP Everson from April 8 – May 31, 2014.

Hamilton will present an artist talk on Tuesday, April 8 at 6:30pm in the Everson’s Hosmer Auditorium. A reception and special Tuesday night screening will follow on the plaza, weather permitting. The talk and reception will be FREE & OPEN to the public.

Can the weight in the touch of a percussionist’s hand be visualized? How can a recording reveal the many subtle actions that bring forth musical virtuosity? What is the space between hearing and seeing, and how do we—the viewer-hearers—occupy this space? Inspired by the variety shows of his youth, composer David Lang envisioned a nearly impossible synchronization of two percussionists when he originally wrote the composition, “Table of Contents”. After seeing a performance in 2011 by percussionists Susan Powell and Joseph Kryger, who were the first to perform the work as Lang originally envisioned, Hamilton imagined attaching an array of low-resolution mini surveillance cameras to the hands of the percussionists and instruments. In the resulting video piece, Hamilton’s table, the cameras occupy the gap between hearing and seeing, and the edit generates a counter rhythm, a back-and-forth that brings us intimately into “impossible” virtuosity.

(Please note that the title of Hamilton’s piece, which originally appeared as table of contents, was shortened to table at the request of the artist to further distinguish it from Lang’s composition.)