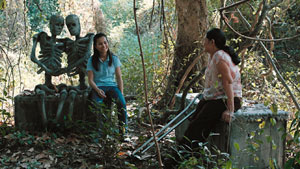 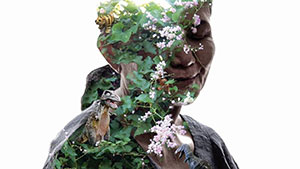 In conjunction with the exhibition, a special indoor screening of Cemetery of Splendor followed by a live streaming Q&A with Apichatpong at the Everson Museum of Art’s Hosmer Auditorium will take place on Thursday, October 20 at 6:30pm. This event will be free & open to the public. Reception follows.

This exhibition is part of the year-long program, UVP 2016-17: Interzones.

Fireworks (Archives) is an installation-based short-form work by internationally acclaimed Thai filmmaker and installation artist Apichatpong Weerasethakul. This piece acts as a counterpoint and pendant to Apichatpong’s latest feature film, Cemetery of Splendor, an official selection of the 2015 Cannes Film Festival. In Cemetery of Splendor, a mysterious sleeping sickness besets soldiers, who are transferred to a temporary clinic in a former school in Thailand’s long oppressed and politically marginalized northeast. The memory-filled space becomes a revelatory world for housewife and volunteer Jenjira, as she watches over Itt, a handsome soldier with no family visitors. Jen discovers Itt’s cryptic notebook of strange writings and blueprint sketches suggesting there may be a connection between the soldiers’ enigmatic syndrome and the mythic ancient site that lies beneath the clinic.

The related Fireworks (Archives) is an abstract and intensely graphic exploration of one of the key settings for Cemetery of Splendor, the Sala Keoku sculpture park, which features religiously inspired, concrete sculptures of animals and gods. In this hallucinatory setting, we see the two central characters of Cemetery of Splendor appear, approach each other, and disappear like specters in the night time garden amid the disorienting flash of fireworks and flares. Fireworks (Archives) acts as a counter-point to the slow, sun-drenched melancholy at the heart of Cemetery of Splendor. For the artist, the Sala Keoku sculpture park is a manifestation of the way that an arid land and a long history of political oppression from the central government in Thailand have driven the inhabitants to “dream beyond” mundane realities – in this sense, the fantastical statues of Sala Keoku are a form of revolt. In the words of the artist, “Together they commemorate the land’s destruction and liberation.”

Acclaimed filmmaker, Apichatpong Weerasethakul’s innovative filmmaking practice over the last two decades simultaneously engages with the notion of place in multiple registers: both the highly situated and often fraught geopolitical territories of his native Thailand, as well as the mundane “everyday world” haunted at its margins by liminal figures, the displaced, the politically and economically marginalized, and the uncanny specters of collective history and personal memory.

Working independently of the Thai commercial film industry, Apichatpong Weerasethakul work has been presented widely in film and art contexts internationally, including the Sharjah Biennial in the UAE (2013) and dOCUMENTA 13 in Kassel, Germany (2012), and in solo and group exhibitions including Haus der Kunst in Munich, Germany; Walker Art Center, Minneapolis; New Museum, New York.

His 2009 film, Uncle Boonmee Who Can Recall His Past Lives, won the Palme d’Or prize at the 63rd Cannes Film Festival, and his most recent film, Cemetery of Splendor screened at Cannes in Un Certain Regard. Additional feature films include: Syndromes and a Century (2006), Tropical Malady (2004), The Adventures of Iron Pussy (2003), Blissfully Yours (2002), and Mysterious Object at Noon (2000).