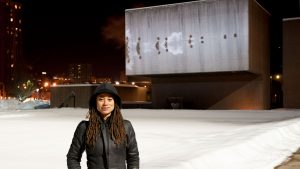 As part of Celestial Navigation: a year into the afro future, Light Work UVP and Community Folk Art Center (CFAC) are pleased to co-present Black Radical Imagination I & II, a two-part screening of experimental film and video curated by Erin Christovale and Amir George exploring the aesthetics of afro-futurism and afro-surrealism. This touring program has visited prestigious academic institutions, cutting edge film festivals, and contemporary art venues around the world, but has not yet screened in Central New York.

Both events are FREE & OPEN to the public.

Black Radical Imagination I & II is presented in conjunction with the exhibition of Jeannette Ehlers: Black Bullets at UVP’s Everson Museum of Art venue and the exhibition of Cristina de Middel’s “The Afronauts” at CFAC.

Erin Cristovale is a curator based in Los Angeles focusing on film/video within the African Diaspora. She graduated with a B.A. from the USC School of Cinematic Arts and currently has an exhibition at the MoCADA Museum called “a/wake in the water:Meditations on Disaster”. She also works with a collective of creatives called Native Thinghood promoting emerging artists of color.