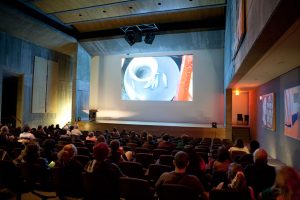 Leventhal Restack completed Platonic during her 2013 Light Work artist residency, during which she edited, shot additional footage, and created a series of related collaged drawings.

The UVP Everson exhibition will feature a special cut of Platonic from September 12 – October 26. The “uncut” version, set to premiere at the New York Film Festival this October, will be screened during Leventhal’s artist talk, along with other selections from her body of video work.

Leventhal will give an artist talk in the Everson’s Hosmer Auditorium on Thursday, October 17 at 6:30pm.

Reception will follow on the plaza at 7:30pm. Baked goods & coffee provided by Recess.

In Leventhal ReStack’s Platonic, geometric specters twirl in space; pet cats foam at the mouth; a little boy mistakes his junkie dad for a superhero; and a confused adolescent worries he has sired a centaur. “Platonic” references both the ancient philosopher’s metaphysics of ideal Forms, which simultaneously exist outside our perceptions and yet give rise to them, and the related meaning in common parlance of non-romantic love. The artist trains her searching lens on the distance separating bodies, moments, and perspectives. The result is a study in the awkward gaps between appearance and reality, seeing and understanding, desire and its object.

In 2003, Dani Leventhal ReStack received an MFA in sculpture from the University of Illinois at Chicago and in 2009 an MFA in film/video from Bard College. She has screened her work at The Rotterdam International Film Festival, The Gene Siskel Film Center, PS1, Ann Arbor, Cine Cycle and Anthology Film Archives. Leventhal has been the recipient of numerous grants and awards, among them the Wexner Center Film/Video Residency, the Milton Avery Fine Arts Award, the Astraea Visual Arts Grant and the Post MFA Fellowship at The Ohio State University. Her work is in the permanent collections of the Museum of Modern Art in New York, The University of Illinois at Chicago, and Yale University in New Haven, CT. Leventhal currently teaches at the Ohio State University in Columbus, Ohio.

Learn more about the artist’s work at: www.lightwork.org/archive/dani-leventhal