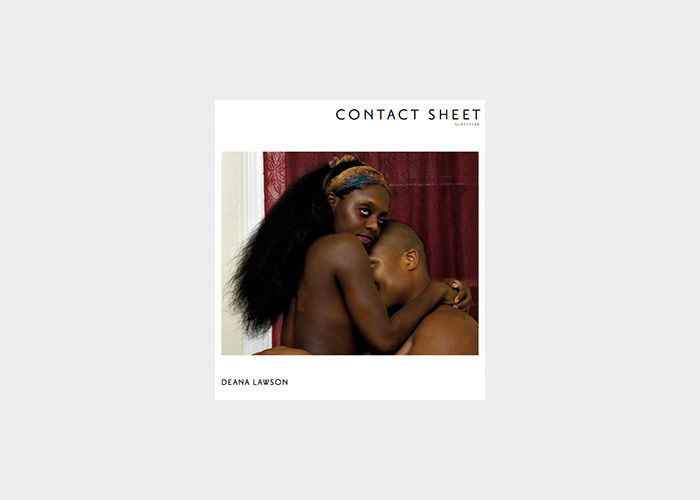 Deana Lawson’s photographs examine how the body informs personal, political, and historical identities. Her psychological portraits seem to start out in one shape before morphing into something unexpected. Their apparent transparency at first glance dissolves into a complex set of questions about the people who are imaged and the nature of photographing, questions that will never have clear and finite answers, no matter how hard and long we look.

Lawson calls the people she photographs her family, whether they are in fact related or whether they met as friends in church, at the grocery store, or in a club. The ties that bind her images together are not in the blood but rather in the shared experience of representation.

If the personal is political, then the portrait may present the most intense form in which to control the message of the self. In viewing Lawson’s portraits, as we come to terms with the body and the sometimes uncomfortable intimacy of a stranger’s personal truth, we see flesh, beauty, pain, salvation, life, and death all performed within the context of the frame. As bare identities emerge from these photographs, we may reassess the often easily avoided questions of what we are willing to look at and why.

The rooms and faces in the photographs may change, but the gaze and gesture of Lawson’s subjects consistently telegraph a unified refrain: The beauty of this moment in front of the lens belongs to them. The people in her photographs offer an unrelenting intention to be seen as they want to be seen. Just as important, they possess an unbridled courage to reveal that fleeting truth to others. Although Lawson is a collaborator and co-adventurer in the making of each picture, her subjects make the key contributions that give the photographs in Corporeal their power.

Deana Lawson received her MFA in photography from Rhode Island School of Design in 2004. Lawson is a recipient of the 2008–2009 Aaron Siskind Fellowship Grant, a 2008 Connecticut Commission on Culture & Tourism Grant, and a 2006 New York Foundation for the Arts Grant. Publications featuring her work include Time Out NY and the 2009 Light Work Annual. Her work has been exhibited widely, and she has held artist residencies at Light Work, Visual Studies Workshop, and the Lower Manhattan Cultural Council. Lawson currently lives and works in Brooklyn, NY.