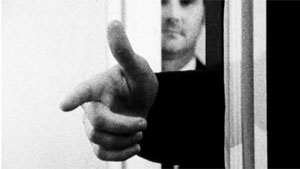 This exhibition will be paired with a special indoor screening of The Illinois Parables, Stratman’s most recent long-form film, followed by a Q&A with the filmmaker on April 20, 2017 at the Everson Museum of Art.

In Deborah Stratman’s “Xenoi,” the Greek island of Syros is visited by a series of unexpected guests: immutable forms, outside of time, aloof observers of the human condition.

The hovering guests include five regular, convex polyhedrons comprised of identically sided, congruent faces:  the tetrahedron, cube, octahedron, dodecahedron and icosahedron. These are Platonic Solids, named for the famed ancient Greek philosopher, who described them as part of a higher level of reality in his dialogue, “Timeaus.”

Shot on location and featuring a hypnotic score, “Xenoi” scans the horizon of modern day Greece, a landscape at once timeless and jarringly contemporary. Ancient ruins and azure waters give way to the skeletons of office buildings abandoned before completion, their bare concrete columns oddly reminiscent of the Grecian temples that stand as symbols of “Western Civilization.”

The sites “visited” in the video are Armeos beach, Pherecydes’ Cave, Ano Syros spring, Ermoupolis, Kastri, the Apollo Theater, Anemogennitries hilltop, and at various hillside yapia. Pherecydes of Syros (580-520 BC) was the author of the “Pentemychos,” a pre-Socratic cosmogony, and is commonly held to be the teacher of Pythagoras. Ermoupolis is a port town and capital of the South Aegean region. Kastri (2800-2300BC), is an early Cycladic fortified settlement, located on the north side of the island. “Yapia” is the plural of “yapi,” the informal Greek term for an unfinished, abandoned building, especially prevalent around Greece ever since the economic crisis.

“Xenoi” is the plural of “xenos,” an enigmatic word usually translated as “stranger”—but whether the stranger is friend or foe depends on context and interpretation. What do these geometric specters portend in a contemporary climate where consumer culture and economic austerity collide?

Deborah Stratman is a Chicago-based artist and filmmaker interested in landscapes and systems. Much of her work points to the relationships between physical environments and human struggles for power and control that play out on the land. Recent projects have addressed freedom, expansionism, surveillance, sonic warfare, public speech, ghosts, sinkholes, levitation, propagation, orthoptera, raptors, comets and faith. She has exhibited internationally at venues including MoMA NY, Centre Pompidou, Hammer Museum, Mercer Union, Witte de With, the Whitney Biennial and festivals including Sundance, Viennale, CPH/DOX, Oberhausen, Ann Arbor, Full Frame, Rotterdam and Berlinale. Stratman is the recipient of Fulbright, Guggenheim and USA Collins fellowships, a Creative Capital grant and an Alpert Award. She lives in Chicago where she teaches at the University of Illinois.

Interzones is a year-long program at UVP and partner organizations that will feature the work of established and emerging artists exploring liminal states, haunted places, and the spaces that lie in-between.