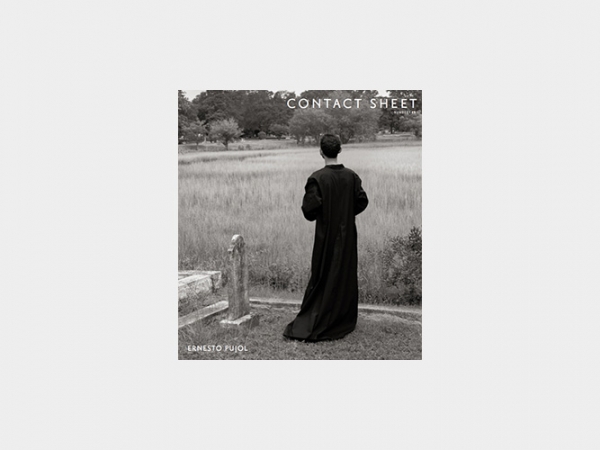 The setting for Ernesto Pujol’s installation Walk #1 is Magnolia Cemetery in Charleston, South Carolina. He began the project just as the war in Iraq was escalating, and as he walked through the cemetery, which is filled with the graves of soldiers killed in the Civil War, the project took on a new layer of meaning.

After finishing college in 1980 Pujol spent four years as a cloistered monk. This experience has informed his art, and several of his previous projects have explored the intersection of spiritual beliefs and secular practice. Because he views certain religious vestments as costumes that cover the human body with dignity, his selection of a clerical robe brings a deeply felt decorum of piety to the project. Wearing the full-length robe, Pujol photographed himself walking through the cemetery as he assumed the role of spiritual guide through the vestiges of the dead.

Pujol extends the narrative thrust of the project by placing twelve framed, hand-blown glass plates throughout the installation, each containing a single word, such as war, peace, heroes, arms, and truth. He selected the words from Civil War monuments and the writings of Walt Whitman, an American author known as a proponent of contemplative and restorative walks.

Pujol considers Walk #1 to be like the preserved fragments of a long poem. Those fragments embrace many traditions and borrow from many different art forms and social movements. Using the medium of photography, Pujol has brought these traditions and ideas together in a performance of contemplation. The work bears witness to sorrow and loss through images that have a graceful utility beyond their power to record.

Ernesto Pujol was born in Cuba and grew up in San Juan, Puerto Rico. He received his BA in humanities and painting from the Universidad de Puerto Rico, and his MFA in interdisciplinary art practice from The School of the Art Institute of Chicago. His work has been exhibited internationally, and he has received numerous awards and fellowships. In addition, Pujol’s work is included in various permanent collections, including at the McNay Art Museum in San Antonio, TX; the Herbert F. Johnson Museum at Cornell University; Casa de las Americas in Havana, Cuba; the Museum of Contemporary Art in Los Angeles; among many others. He participated in Light Work’s Artist-in-Residence Program in 1999, and curated the exhibition Desire: Contemporary Photography from the Visual AIDS in the same year.