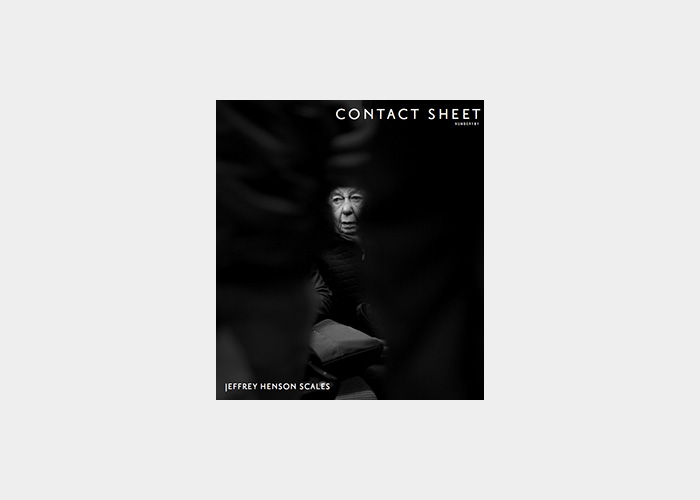 In 2008 Jeffrey Henson Scales was diagnosed with prostate cancer. Through the tenacity of his wife Meg, they found a treatment for Jeffrey’s cancer, which was successfully performed outside the United States. Meg was also the force that urged him to get up, get out, embrace the transition, and make photographs again. At the time he had been working for several years as the photography editor of The New York Times Week in Review and The Book Review, where looking at photographs had nearly replaced his passion for making them.

All of the photographs in the exhibition were made in the year following his treatment and what began as an exercise in the process of healing concluded in renewing his passion for engaging life on the street. Most of the photographs in the series were made in and around Times Square where Scales works. The energy of the street mirrors the character of New York and the tradition of street photography is more closely associated with New York than any other city. The numerous photographers who have captured and choreographed the chaos of life moving by on its way to someplace else have defined an important chapter in the history of photography. Most contemporary photographers have been happy to keep that a closed chapter, feeling there was no more to say about something that is in constant motion yet perceived as remaining the same.

Even without knowing the back-story about the circumstances that led Scales to make these photographs, they are still easily read as images that are about a transformation. In almost every image there is a central figure that emerges out of the crowd to claim their presence and define their personal place. In the photographs the individuals don’t stand out from the crowd but are recognized for the important moment they have in constructing the pleasure of observing. The photographs are a celebration of a instant where one thing, one gesture, or one look becomes, not so much a decisive moment, but a vital pause of recognition that makes everything else around it illuminated with promise.

Jeffrey Scales was born in San Francisco in 1954. Though largely self taught, Scales received some training as a teenager from the photojournalist Stephen Shames, and later developed a relationship with the photographer Garry Winogrand while documenting life on the streets of Los Angeles. Scales has spent more than forty years as a documentary photographer. His photographs have been exhibited at museums throughout the United States and Europe and have appeared in numerous photography magazines, books, and anthologies. His work is also featured in the permanent collections of The Museum of Modern Art, The George Eastman House, The Baltimore Museum of Art, and The City Museum of New York. A one-person exhibition, Pictures from America by Jeffrey Henson Scales, sponsored by The Visual Studies Workshop in Rochester, NY, traveled throughout the United States from 1996 to 2001.

Scales has been a photography editor for The New York Times since 1998, where he currently edits The Week in Review, The Book Review sections, and co-edits The Year in Pictures. Since 2005 he has also been an adjunct professor at the Tisch School of the Arts of New York University. He and his wife own the Harlem-based photo archive, HSP Archive, and the multimedia production company, Henson Scales Productions.