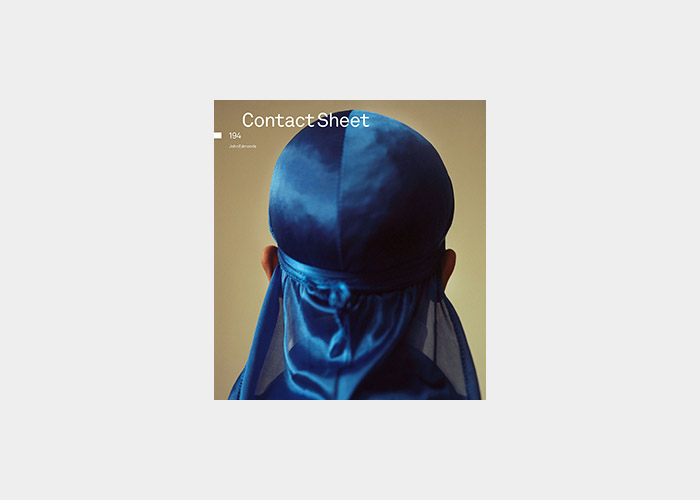 In his exhibition, Anonymous, John Edmonds combines two distinct series of portraits, both of which conceal the identities of their subjects. The first series comprises striking formal studies of individuals wearing hoods on the street, photographed from behind. We can quickly read this suite of images as a statement on the unjust death of Trayvon Martin and how individuals of color face issues of racism, safety, and injustice in systemic ways. “All the work that I make is from a very personal place,” says Edmonds of his process. “It starts with me.” Edmonds further embeds himself in this work by photographing his subjects wearing his own hoodies and jackets. With little visual clues to guide us, we may only learn from the artist that the obscured individuals in fact vary in race, gender, and age.

In contrast to the charged public space that Edmonds considers with these pictures, a second series of portraits celebrates blackness and beauty through private and sensual pictures of men wearing du-rags. Once again, Edmonds photographs his subjects from directly behind them. We can trace the du-rag’s origin to the head-wraps worn by female slaves during the antebellum period, and later used to preserve hairstyles, but today both men and women wear du-rags as a symbol asserting cultural pride. A melancholy underlies these portraits, though a majestic and spiritual quality also comes forward, calling to mind totems and religious iconography. A softness and warmth emanates from the colors and folds of the cloth. Edmonds exhibits these portraits on a larger-than-life, monumental scale, implying both nobility and strength, while also subtly undermining the grandiosity by printing on delicate, flowing silk.

Edmonds takes an intimate approach to portraiture as a means of exploring symbols of black culture and the body, and through his pictures he poses larger questions about viewership, desire, and power today. Through concealment, he leaves much to the viewer’s imagination, revealing both the complexity of images themselves and the significance of the preconceptions that we bring to them. “At the heart of all of my work,” says Edmonds, “I want to leave people with something that is more human—despite the facade—and to open up feeling and empathy.”

John Edmonds is an artist working in photography whose practice includes fabric, video, and text. He received his MFA in Photography from Yale University School of Art and his BFA in Photography at the Corcoran School of Arts and Design. Most recognized for his projects in which he focused on the performative gestures and self-fashioning of young black men on the streets of America, he has also made evocative portraits of lovers, close friends, and strangers. In addition to his residency here at Light Work, he has participated in residencies at the Center for Photography at Woodstock in Woodstock, New York, FABRICA: The United Colors of Benneton’s Research Center in Treviso, Italy, and The Skowhegan School of Painting & Sculpture in Skowhegan, Maine. Edmonds lives and works in Brooklyn, New York, and is represented by ltd los angeles.

Urban Cinematheque 2017: Get Out
Scroll to top