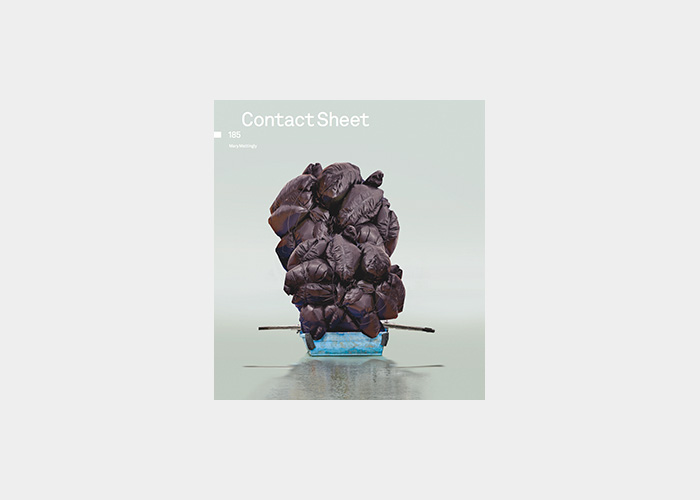 Light Work is pleased to present Mass and Obstruction, a solo exhibition of work by artist Mary Mattingly. In conjunction with her exhibition at Light Work, Mary Mattingly will be presenting Human and Object, a selection of video works at Urban Video Project (UVP) at the Everson Museum of Art. The exhibition will be on view January 20-30, from dusk-11pm. Find more info online at www.urbanvideoproject.com.

Mary Mattingly creates photographs, sculpture, video and large-scale public art projects ostensibly about climate change but revealing deeper focus on survival and endurance in the face of ecological degradation and violence. Describing photography as the universal language of storytelling, Mattingly blurs the line between fact and fiction, present and future. Using her camera both to document and fictionalize over thirteen years of her environmental art and activism, she creates images by digitally collaging together multiple locations. These fictional, non-specific locations often look strangely futuristic and allow for a conversation about the earth and our impact on it. For Mattingly the “location” is the world’s ecosystem. She looks at the big picture and forces us as viewers to confront our own culpability and the ethics of our choices, a fundamentally important pre-requisite for personal or political change. For the exhibition Mass and Obstruction, the artist presents images and objects that emerge from an unflinching scrutiny of her own consumption and life style as an artist.

Mary Mattingly is an artist based in New York. Her work has been exhibited at the Brooklyn Museum of Art, The Kitchen, Museo National de Belles Artes de la Habana, International Center of Photography, The Seoul Art Center, The Bronx Museum of the Arts, The New York Public Library, deCordova Museum and Sculpture Park, and The Palais de Tokyo. She participated in smARTpower, an initiative between the U.S. Department of State and the Bronx Museum of the Arts in the Philippines. She has been awarded grants and fellowships from the James L. Knight Foundation, A Blade of Grass, Eyebeam Center for Art and Technology, Yale University School of Art, The Harpo Foundation, NYFA, The Jerome Foundation, and The Art Matters Foundation. Her work has been featured in Aperture Magazine, Art in America, Artforum, Sculpture Magazine, The New York Times, New York Magazine, Le Monde Magazine, The New Yorker, The Wall Street Journal, on BBC News, MSNBC, Fox News, NPR, NBC, as well as on Art21’s “New York Close Up” series. Her work has been included in books such as the Whitechapel/MIT Press Documents of Contemporary Art series titled Nature, edited by Jeffrey Kastner, Triple Canopy’s Speculations, the Future Is… published by Artbook, and Henry Sayer’s A World of Art, 8th edition, published by Pearson Education Inc. Mattingly participated in Light Work’s Artist-in-Residence program in November 2014.