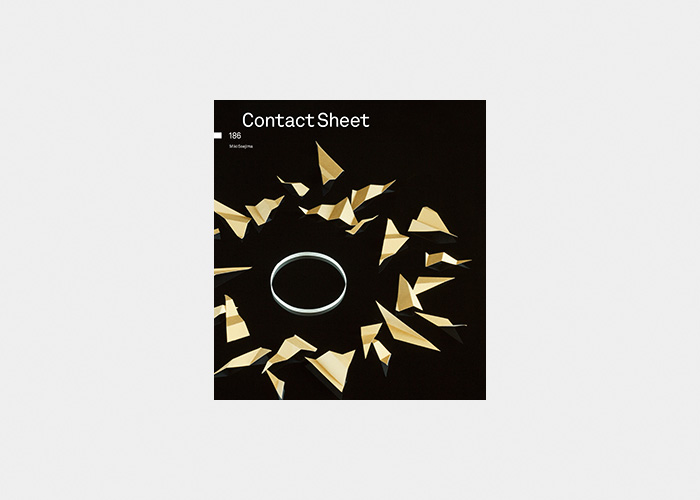 With her photographic projects, Japanese artist Miki Soejima walks the line between fact and fiction, uncovering the inherent artifice and truths in images, the significance of authorship, and the power of suspended disbelief.

Soejima elaborated her latest project during her Light Work residency last year. The Passenger’s Present combines photographs made in Japan, in 2013 and 2014, with constructed still life images. Together, they allude to narratives, histories, and myths beneath the surface of Japanese society. They include images of a Kamikaze plane, a nuclear reactor, city street scenes, and reappearing rainbows. Soejima composed the still lifes in the studio with carefully folded paper abstractions. Some include small red spheres, which add weight amongst the light paper compositions, especially if one recognizes them as Atomic FireBalls, the American hard candy named after the atomic bomb.

For a viewer, it’s a not a simple or even singular story. Soejima invites us along as she finds significant moments in the movement of contemporary life and within the stillness of the paper compositions. “I think my core interest lies in how narrative context can shape our way of seeing the world and affect how we act,” says Soejima. We must listen closely to her photographs. As a third component, Soejima integrates images from her grandfather’s photo albums, made while he served in Japanese-occupied Manchuria from 1931-1945. She quotes his solemn declaration: “There is nothing to believe anymore.” This project’s underlying tension is war’s immeasurable devastation. Soejima’s images carry a feeling of hopelessness too. Even the recurring rainbows are somehow disconcerting. Soejima’s pictures probe deep into everyday moments where careful looking uncovers both beauty and a very real sadness.

Born in 1980 in Japan, Miki Soejima started working with photographs after completing her studies in Cultural Anthropology at Ryukoku University in Kyoto, Japan, which included a one-year exchange program at
the University of Westminster in London. She then moved to London and learnt photographic practice at the London College of Communication. She is the winner of the 2012 First Book Award, set up by MACK and the National Media Museum, Bradford, and her book Mrs. Merryman’s Collection was published by MACK in 2012. She was nominated for the Ihei Kimura award in 2013 and the Foam Paul Huf Award in 2014 and 2015. Her second book, The Passenger’s Present is going to be published by MACK. Her work has been exhibited widely in Europe and in the USA including: The Kraszna-Kraus Book Award and The First Book Award at Media Space, Science Museum, London in 2015; Truth, Facts, Fictions, Lies at PhotoIreland Festival, Dublin in 2014; From Here On curated by Joan Fontcuberta, Erik Kessels, Martin Parr, Joachim Schmid, and Clément Chéroux at Arts Santa Mònica, Barcelona in 2013; and Mrs. Merryman’s Collection at Michael Hoppen Gallery, London in 2013.