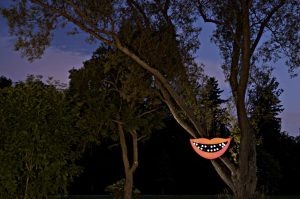 Light Work’s Urban Video Project (UVP) is pleased to announce the exhibition Shuffle and Shake by celebrated multimedia artist, Sanford Biggers from November 6-December 27, 2014 as an architectural projection on the facade of the Everson Museum of Art.

In conjunction with the exhibition, Biggers will give an in-person artist talk on Tuesday, November 11, at 6:30 p.m. in the Everson’s Hosmer Auditorium.

Shuffle and Shake form the first two parts of Sanford Bigger’s Odyssean trilogy about the formation and dissolution of identity. Both feature the electric presence of Ricardo Camillo, a Brazilian-born, Germany-based choreographer, stuntman, clown and DJ.

Shuffle is about the struggle between our own perception of self vs. others’ projections onto us. Shuffle also examines how we matriculate through society, often masking our insecurities, pain, longing and the internal schizophrenia of our id. Original soundtrack composed from the artist’s field recordings made in Indonesia.

Shake, the second video of the trilogy, follows Camillo as he walks from the favelas (or shantytowns) of Brazil, to the ocean before finally transforming into an androgynous silver-skinned figure. Though the final imagery is straight out of Afrofuturism, recalling the specific costuming and aesthetics of P-Funk, it is remains extraordinarily human at the same time, referencing the soul searching of Greek mythology.

An LA native working in NYC, Sanford Biggers creates artworks that integrate film, video, installation, sculpture, drawing, original music and performance. He intentionally complicates issues such as hip hop, Buddhism, politics, identity and art history in order to offer new perspectives and associations for established symbols. Through a multi-disciplinary formal process and a syncretic creative approach he makes works that are as aesthetically pleasing as they are conceptual.

The significance of Biggers’ work within contemporary society has been celebrated through solo exhibitions both nationally and internationally, most recently at the Brooklyn Museum, Sculpture Center and Mass MoCA. He has participated in prestigious residencies and fellowships including: Akademie Schloss Solitude, Stuttgart, Germany; Ujazdowski Castle, Warsaw, Poland; Headlands Center for the Arts, Sausalito, California; ARCUS Project Foundation, Ibaraki, Japan; and the Art in General/ Trafo Gallery Eastern European Exchange in Budapest, Hungary. He has been a fellow of the Creative Time Global Residency, the Socrates Sculpture Park Residency, the Lower Manhattan Cultural Council World Views AIR Program, the Eyebeam Atelier Teaching Residency, the Studio Museum AIR Program, the P.S. 1 International Studio Program, and the Skowhegan School of Painting and Sculpture residency.

Sanford Biggers’ installations, videos, and performances have appeared in venues worldwide including Tate Britain and Tate Modern in London, the Whitney Museum and Studio Museum in Harlem, New York, and the Yerba Bue a Center for the Arts in San Francisco, as well as institutions in China, Germany, Hungary, Japan, Poland and Russia. The artist’s works have been included in notable exhibitions such as: Prospect 1 New Orleans Biennial, Illuminations at the Tate Modern, Performa 07 in NY, the Whitney Biennial, and Freestyle at the Studio Museum in Harlem. His works are included in the collections of the Museum of Modern Art, Walker Art Center, Whitney Museum, Brooklyn Museum and Bronx Museum.

Biggers is Assistant Professor at Columbia University’s Visual Arts program and a board member of Sculpture Center, Soho House and the CUE Foundation. He has also taught at Virginia Commonwealth University’s Sculpture and Expanded Media program and was a visiting scholar at Harvard University’s VES Department in 2009.

For more information, go to sanfordbiggers.com.

“Celestial Navigation”, a year-long program at UVP, will explore the work of major established and emerging artists through an afrofuturist lens, including works by Julien, Sanford Biggers, Xaviera Simmons, Jeanette Ehlers (as part of “The Black Radical Imagination 2014,” curated by Erin Christovale and Amir George), Cristina de Middel and Cauleen Smith. Artist talks, screenings and a panel discussion in spring 2014 will be included in the programming. Partner venues featuring cross-programmed exhibitions include Community Folk Art Center (CFAC) and Light Work (both in Syracuse).