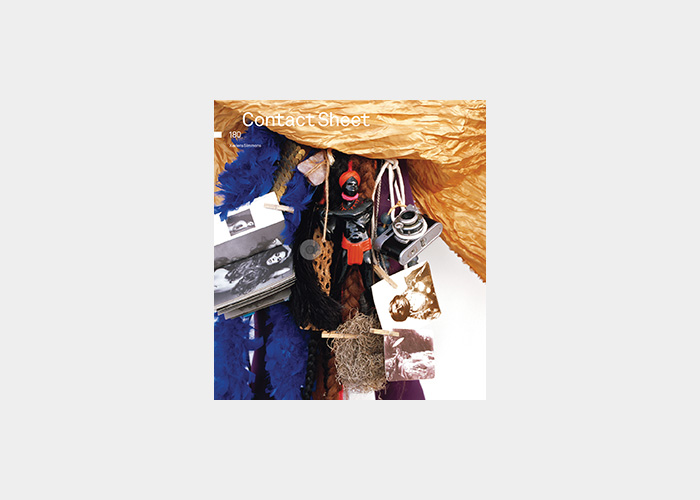 In conjunction with this exhibition Xaviera Simmons: Number Sixteen will be on view at the Urban Video Project, Everson Museum of Art from January 15-31, 2015, Thursday through Saturday, dusk to 11pm. An artist talk will be held in on Tuesday, January 27 at 6:30pm in the Watson Auditorium, Robert B. Menschel Media Center, 316 Waverly Avenue, Syracuse, NY.

Light Work and Urban Video Project are proud to present Accumulations and Number Sixteen, concurrent exhibitions featuring the work of multidisciplinary artist Xaviera Simmons.The works within these exhibitions present an artist working with— and through— formal languages of performance, video, sculpture, photography, and social and art histories.

Accumulations presents a group of photographs from Simmons’s Index/ Composition series. At first glance, the images emerge as a series of complex and abstract sculptural collages. Closer inspection reveals something else: textiles pulled taught over what appears to be a torso, with a barrage of objects hanging from the body. Fabric, a cache of photographic texture and imagery, feathers, palm fronds and other diverse materials tumble across the center of each photograph—composing an explosion referent to the sculptural within the photographic. Accumulations works to both obscure and define the formal qualities of photography by using elements of sculpture, assemblage, chance, and other methods to produce the works.

Number Sixteen is an hour-long, unedited video documenting a performance produced without an audience which engages endurance, abstraction, and the energies beneath abstraction. In the video, a vocalist and performer work together in a studio space. The video’s audience becomes witness to a layered convergence: materials and texts, script and chance, sound and image, time and space, the body and its limits. Like the photographic and sculptural works in Accumulations, Number Sixteen reveals a complex network of accumulated inspirations, cultural allusions, and visceral histories.

Xaviera Simmons received her BFA from Bard College in 2004 after spending two years on a walking pilgrimage retracing the Trans Atlantic Slave Trade with Buddhist Monks. She completed the Whitney Museum’s Independent Study Program in Studio Art in 2005 while simultaneously completing a two-year actor-training conservatory with The Maggie Flanigan Studio. Simmons has exhibited nationally and internationally. Major exhibitions and performances include The Museum of Modern Art, NYC; MoMA PS1, NYC; The Studio Museum In Harlem, NYC; The Contemporary Arts Museum Houston, Houston, TX; The Public Art Fund, NYC; David Castillo Gallery, Miami, FL; among many others. Her works are in major museum and private collections including Deutsche Bank, UBS, The Guggenheim Museum, The Agnes Gund Art Collection, The Museum of Contemporary Art Chicago, The Studio Museum in Harlem, MOCA Miami, and The Perez Art Museum, Miami.