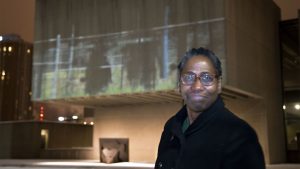 Urban Video Project is pleased to announce the exhibition of in Court by Yvonne Buchanan at UVP Everson from February 14 – March 30, 2013. This exhibition is presented in collaboration with the Everson Museum of Art, which will feature Buchanan’s Strange Tongue January 19, 2013 – March 31, 2013 in the Everson’s galleries.

Buchanan will give a talk in the Everson’s Hosmer Auditorium on Thursday, February 21 at 6:30pm.

Video documentation of the complete talk can be seen on UVP’s vimeo page at: vimeo.com/uvp/yvonne-buchanan-talk.

In Buchanan’s video work, she creates micro narratives of the ghostly presence of histories. Individual, family and community experiences of otherness, and the perpetual small and large traumas sustained, is the focus of her recent work. She is particularly interested in the strategies employed to endure these experiences, especially ideas of religiosity and beliefs in the afterlife. Her subject is often the black body as object and symbol, the embodiment of curiosity, and a “dark” and weighty presence. In constructing her work, she frequently uses the loop, in creating a circular story, one that can be read differently, as scenes repeat.

The piece in Court (Basketball) features a basketball court, where the hopes and dreams of young black men are played out, at the same time as it seems to fluctuate between a site for sport and a cage. The projection of the piece at the UVP Everson venue, with its close proximity to the Onondaga County jail, takes on a special and literal resonance with the audible but invisible play of the inmates on the rooftop court of the correctional facility.

Buchanan’s background in the history and techniques of painting and drawing is a strong influence on her visual form, making her video pieces less cinematic and more spatially related to painting.

Yvonne Buchanan is currently Associate Professor of Art, Design, and Transmedia at the College of Visual and Performing Arts, Syracuse University. Her work has been featured in shows and festivals nationally and internationally, including Rencontres Internationales 2006 (Berlin, Germany and Paris), the Slamdance Festival, the 2008 Whitney Biennial Armory Show, and has shown at Anthology Film Archives, UCLA’s Hammer Museum, and most recently at the Everson Museum of Art as part of TONY 2012.