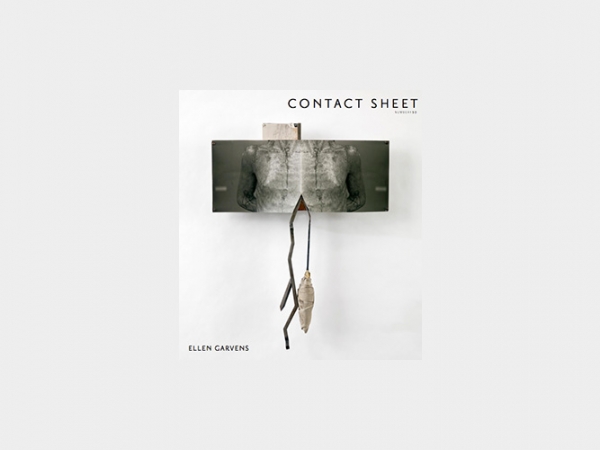 This exhibition unites photographs from Ellen Garvens’ Ambivalence series with photo-based sculptures from her Constructions series. Garvens started the work in Prosthesis as an expression of her own personal experiences with the body. Ultimately, the sculptures and photographs in the exhibition address both the delicacy and the strength of the body as a shared human condition.

Garvens began making the Constructions sculptures in 1998 when she underwent the metamorphosis and wonderful uncertainty of pregnancy. Shortly thereafter, the resiliency of the human body once again came to bear in Garvens’ art-making when her mother was diagnosed with cancer in 1999. Her mother’s hands are featured prominently in many of the sculptures made around this time.

After working on Constructions for a number of years, Garvens visited the University of Washington Prosthetic and Orthotic Clinic, where she discovered a connection between her work on the assemblages and the creation of prosthetic devices—both are rooted in looking behind the surface of the body to discover restorative relationships. She began to make the Ambivalence photographs as a way to document the creation of these devices that reinstate the balance of the body at the point of its absence.

The Ambivalence images and Constructions sculptures come together in the exhibition Prosthesis to remind us of the vulnerability of the human body as well as its ability to create and to be healed.

The work of Ellen Garvens has been exhibited nationwide, including at such venues as Solomon Fine Art in Seattle, WA; Jayne H. Baum Gallery in New York, NY; Cleveland Center for Contemporary Art in Cleveland, OH; Fotofest International in Houston, TX; and Dolby Chadwick Gallery in San Francisco, CA, among others. She has received numerous grants, awards, and fellowships, including a Royalty Research Fund Grant and an Artist Trust Fellowship from the Washington State Arts Commission, among others. Her work is included in permanent collections at the Museum of Modern Art in New York, NY; Houston Museum of Fine Arts in Houston, TX; Allen Memorial Art Museum in Oberlin, OH; and Yale University Art Gallery, New Haven, CT.