Frank Gillette:
In the Creeks 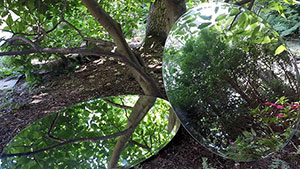 In celebration of the opening, Everson curator DJ Hellerman will lead a discussion with co-curator David Ross, who curated Gillette’s first exhibition at the Everson nearly 50 years ago, and artists Suzanne Anker and Frank Gillette on Friday, February 8 at 6pm in the Everson’s newly renovated Hosmer Auditorium. In the Creeks can be viewed on the plaza before and after the talk.

Part of Gillette’s series for Classical Video — tapes designed to act as non-literal, visual interpretations of classical music — In the Creeks is a lush, contemplative study of the natural microcosm of a creek in summer, transformed into an almost abstract, formalist microcosm. The dichotomy between documented realism and Gillette’s mediated perception is reflected in the work’s painterly interplay of natural textures, pattern, color and form. Using subtle dissolves, in which each image subtly merges into the next, he heightens the sense of natural time. This study in light and movement describes a contained ecosystem, defined within a graceful set of aesthetic parameters, that becomes a metaphorical mirror of cognitive activity. This work is set to the music of Marian Marias’ La Sonnerie de St. Genevieve de Mont de Paris.

Frank Gillette was born in 1941 in Jersey City, New Jersey. He attended Columbia University, dropping out after two years. He studied painting at Pratt Institute in New York, dropping out after two years. An early theorist of video’s formal and aesthetic parameters, in 1969 he was a founding director and president of the influential video collective Raindance. With influences ranging from cybernetics to painting, Gillette was an innovator of the multi-channel installation form, experimenting with image feedback, time-delay and closed-circuit systems. His seminal installation Wipe Cycle (1969) (with Ira Schneider), was included in the landmark 1969 exhibition TV As A Creative Medium at the Howard Wise Gallery in New York.

Gillette is the recipient of numerous awards, including fellowships from the Rockefeller Foundation and the Guggenheim Foundation, and grants from the New York State Council on the Arts and the National Endowment for the Arts. He was artist-in-residence at the American Academy in Rome in 1984-85. He is the author of numerous published works, including Between Paradigms (1973) and Of Another Nature (1988). His work has been presented in solo exhibitions including: The Everson Museum of Art, Syracuse; Contemporary Arts Museum, Houston; The Corcoran Gallery of Art, Washington D.C.; Howard Wise Gallery, New York; Leo Castelli Gallery, New York; Long Beach Museum of Art, California; The Institute of Contemporary Art, Boston; and the Whitney Museum of American Art, New York. In addition, Gillette’s work has been included in numerous group shows including: Kunsthalle, Cologne; Documenta 6, Kassel, Germany; Venice Biennale; The Museum of Modern Art, New York; Carnegie Museum, Pittsburgh; San Francisco Museum of Modern Art; Neuer Berliner Kunstverein, Berlin; and Castello di Rivoli, Turin, Italy, among others.