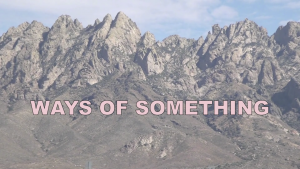 Ways of Something
Screening + Q&A with Lorna Mills

Light Work’s Urban Video Project is pleased to present the exhibition Lorna Mills: Ghost Jets from February 14 to March 30, 2019 at their architectural projection venue on the Everson Museum facade. Mills’ practice regularly makes use of appropriated materials mined from the internet and popular culture, remixing these bits of digital ephemera into frenetic GIF collage.

In conjunction with the exhibition, Mills will be present for a special indoor screening of her ambitious project, Ways of Something (Episodes 3 and 4), a collaborative re-make of John Berger’s influential 1972 documentary “Ways of Seeing.” Syracuse-based participating artists Emily Vey Duke and Tom Sherman will join Mills for a Q&A following the screening.

Part of the series “HELLO AMIGA: Peaceable Kingdom,” Mills’ Ghost Jets, which will be on exhibit on the facade of the Everson, re-animates “sprites” from the long-dead Amiga Commodore gaming system.

Frank Gillette: In the Creeks

Screening + Q&A with Lorna Mills: Ways of Something
Scroll to top