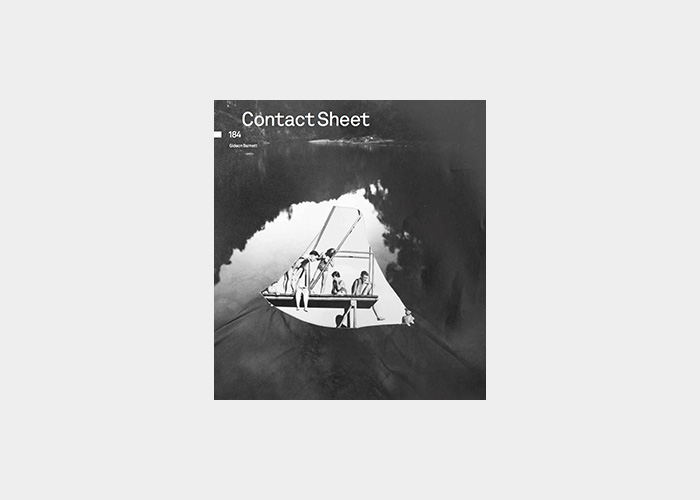 Gideon Barnett’s exhibition After Edith brings together a collection of images that he produced by documenting vandalized photography books found in public libraries. The project began in Miami, Florida, with the discovery of a copy of Emmet Gowin’s Photographs in which the iconic nude portraits of Gowin’s wife Edith had been defaced by prurient library visitors. Parts of the images had been cut with a razor blade and, in some instances, entirely torn out of the book. This deliberate removal of “provocative” imagery and the psychology of what may have sparked such an act fascinated Barnett, and prompted a closer look at the visual by-products—the way in which the cuts open through to another image, for example, or how the tearing of a page can create a compelling juxtaposition of photographs. The vandalized images are unquestionably elegant and beautiful when taken out of context and framed on the wall, yet all together Barnett’s photographs also point to a disconcerting fearful, destructive, or even violent intention behind them.

Some librarians would attempt to mend the most heavily vandalized books by pasting inky black-and-white photocopies of the original pages back into the books. These replacements, reminiscent of smudged charcoal drawings, were equally intriguing to Barnett, so he physically removed the sheets of paper and collected them along the way as a counterpart to the photographs he was making. In his exhibition at Light Work, Barnett shows the photocopies as unique objects, pinned by small magnets into playful forms onto pieces of chalkboard. Barnett visited libraries across South Florida and discovered a number of books that had been altered, and his collection of photographs grew to include traces of other well-known images spanning the last century of photography, from Edward Weston to Gregory Crewdson. Though the reference points within the medium of photography are certainly interesting to see, After Edith aims to consider larger cultural and political concerns of censorship and human nature. Through a thoughtful combination of photographs of vandalized book pages and original found photocopies, Barnett simultaneously recounts that so much of what a photograph signifies will be determined by what the viewer brings to the image. “I’m interested in the generative potential of this vandalism,” explains Barnett, “and how just by reframing it with a camera it can become something new, something on its own.”

Gideon Barnett is an artist from Jasper, TN, currently living in Philadelphia, PA. His work has been exhibited at the Pérez Art Museum, The Museum of Art Fort Lauderdale, and The Wolfsonian–FIU in South Florida; at Nicole Klagsbrun Project and Hunter College in New York, NY; at New Insight at Art Chicago, Chicago, IL; and at the Passage Pommeraye in Nantes, France. He received his MFA and the Toby Devan Lewis Fellowship from Yale in 2011 and in 2013 was awarded a South Florida Cultural Consortium Fellowship. He runs Lord Ludd in Olde City, Philadelphia, with Mylinh Trieu Nguyen.

Everson Summer Film under the Stars: 2015
Scroll to top