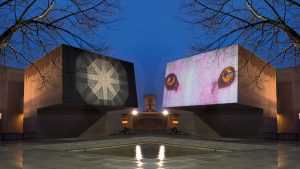 Light Work Urban Video Project is pleased to present a special indoor screening and Q&A of works that use a blend of archival and original material in surreal, unexpected ways to explore the complex histories of urban planning and displacement, cycles of urban decay and gentrification. From the utopian ambitions of the urban renewal programs of the 60’s and 70’s to pro-development and privatization policies spun as “revitalization” from the 80s to today, the question remains: urban renewal by whom and for whom?

Featured artists Emanuel Almborg and Crystal Z Campbell will be present for a Q&A following the screening.

Joining the artists will be Dr. Emanuel Carter Jr., SUNY ESF faculty and practicing urban planner; Lanessa Chaplin, Project Counsel for the CNY Chapter of New York Civil Liberties Union (NYCLU); and Yusuf Abdul Qadir, Director, CNY Chapter of NYCLU, for a conversation exploring how these issues relate to Syracuse’s own history and legacy of urban renewal. Reception will follow.

PLEASE NOTE: Due to scheduling conflicts for the Everson’s Hosmer Auditorium, this event will be held in Watson Theater at Light Work on the Syracuse University campus.

Futures for Failures is double narrative of failure: architectural and social. Archival footage from a demolition of the Pruitt-Igoe building in St. Louis becomes the materialization of failure. Meanwhile, a voice-over recounts a moment of contagious laughter erupting during a stranger’s funeral. The film is an anachronous conversation between the disappeared and the disappearing.

Every Crack Is a Symbol (Charlotte Street Project)

Every Crack is a Symbol (Charlotte Street Project) is a short film that takes as its starting point two events and two kinds of representation of a South Bronx neighborhood in 1980. The horror film Wolfen about killer wolves living in the ruins of the South Bronx and a videotaped protest camp and People’s Convention that attempted to bring together a large coalition of different left social movements and community activists. The horror film was shot in the exact location where 6 months later the protest camp commenced. Both use the urban decay of post-crisis south Bronx as backdrop and symbol in order to generate images, one of demands and radical politics, the other of killer ghost wolves in the ruins of the urban crisis. The horror story of wolves is brought in to relation with urban struggles around and against real estate, finance and neo-liberal policies in the early 1980s.