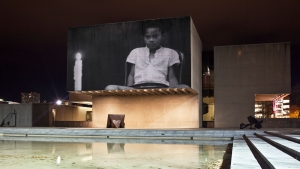 Kevin Jerome Everson will join us in-person for a Q&A following the screening. Reception follows.

FREE & OPEN to the public.

This event is held in conjunction with the exhibition Kevin Jerome Everson: Grand Finale at UVP’s outdoor architectural projection venue on the Everson Museum Plaza from Novemer 9 – December 23, 2017.

Erie consists of a series of single take 16mm shots in and around communities near Lake Erie, including Niagara Falls, Buffalo, Cleveland and the artist’s hometown of Mansfield, Ohio. The scenes relate to Black migration from the South to the North, realities affecting workers and factories in the automobile industry; contemporary conditions, theater, and famous art objects.

Filmed during summer 2009 residency at Hallwalls, Buffalo with assistance from a grant the Mid –Atlantic Foundation for the Arts.

This will be the CNY premiere of Erie.

Additional recent short works (tbd) by Everson will be screened with Erie.

Kevin Jerome Everson (b.1965) was born and raised in Mansfield, Ohio. He has a MFA from Ohio University and a BFA from the University of Akron. He is Professor of Art at the University of Virginia, Charlottesville.  His films have been the subject of mid-career retrospectives at the Viennale (2014); Visions du Reel, Nyon, Switzerland (2012), The Whitney Museum of American Art, NY (2011) and Centre Pompidou, Paris (2009). His work was featured at the 2013 Sharjah Biennial and was included in at the 2008, 2012, and 2017 Whitney Biennials. Museum retrospectives include Modern and Contemporary Art Museum, Seoul, Korea (Feb. 2017) and Tate Modern, London, UK (Fall 2017).

Everson was awarded the American Academy Rome Prize in 2001 and the Alpert Award for Film/Video in 2012. He has been an artist-in-residence at Hallwalls Contemporary Art Center, Yaddo, and the MacDowell Colony. He has received fellowships from the Guggenheim, NEA, NEH, Ohio Arts Council, and the Virginia Museum as well as numerous university fellowships. He is the recipient of grants from Creative Capital and the Mid-Atlantic Arts Foundation.