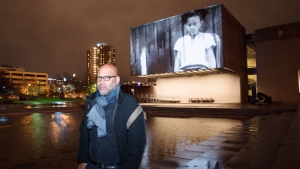 Light Work’s Urban Video Project (UVP) is pleased to announce an exhibition of work by celebrated filmmaker, Kevin Jerome Everson. The short pieces Act One: Betty and the Candle and Grand Finale will be on view at UVP’s outdoor architectural projection venue on the facade of the Everson Museum of Art November 9 – December 23, 2017.

This exhibition will be paired with an indoor screening of Everson’s feature length film, Erie, as well as recent short works by the artist on Thursday, November 16 at the Everson Museum. Kevin Jerome Everson will be present in-person for a Q&A following the screening.

Act One: Betty and the Candle

Act One: Betty and the Candle is a film based on two Gerhard Richter paintings and concentration. It is one of several single take vignettes appearing in the feature film Erie, filmed during a residency at Hallwalls in Buffalo, NY.

Grand Finale is the end of a lovely July 4th evening in Detroit.

Kevin Jerome Everson (b.1965) was born and raised in Mansfield, Ohio. He has a MFA from Ohio University and a BFA from the University of Akron. He is Professor of Art at the University of Virginia, Charlottesville.  His films have been the subject of mid-career retrospectives at the Viennale (2014); Visions du Reel, Nyon, Switzerland (2012), The Whitney Museum of American Art, NY (2011) and Centre Pompidou, Paris (2009). His work was featured at the 2013 Sharjah Biennial and was included in at the 2008, 2012, and 2017 Whitney Biennials. Museum retrospectives include Modern and Contemporary Art Museum, Seoul, Korea (Feb. 2017) and Tate Modern, London, UK (Fall 2017).

Everson was awarded the American Academy Rome Prize in 2001 and the Alpert Award for Film/Video in 2012. He has been an artist-in-residence at Hallwalls Contemporary Art Center, Yaddo, and the MacDowell Colony. He has received fellowships from the Guggenheim, NEA, NEH, Ohio Arts Council, and the Virginia Museum as well as numerous university fellowships. He is the recipient of grants from Creative Capital and the Mid-Atlantic Arts Foundation.