Screening + Q&A with Lorna Mills:
Ways of Something 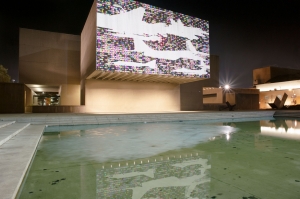 Light Work’s Urban Video Project is pleased to present a special indoor screening of Episodes 3 and 4 of Lorna Mills’ ambitious project Ways of Something at the Everson Museum of Art on Thursday, March 21.

Lorna Mills, as well as Syracuse-based participating artists Emily Vey Duke and Tom Sherman, will join us for a Q&A following the screening. Reception will follow.

This event is held in conjunction with the exhibition of Lorna Mills: Ghost Jets at UVP’s outdoor architectural projection venue on the Everson Museum Plaza from February 14 – March 30, 2019.

The screening will take place in a wheelchair accessible auditorium. The film is subtitled for all spoken dialogue. CART services for the intro and Q&A portions are available upon request by 3/7/19. For more information, call: 315-443-1369 or email: info@urbanvideoproject.com

Ways of Something, Episode 3

Ways of Something, Episode 4

Ways of Something is a collaborative re-make in four episodes of John Berger’s influential 1972 documentary “Ways of Seeing,” which explored the hidden forces of power, wealth, and desire at work in traditional notions of art. For Ways of Something, Mills crowd-sourced with over 115 digital and new media artists to produce minute long videos inspired by each minute of the original, producing an amazing homage that takes the viewer on a tour art in a post-internet age.