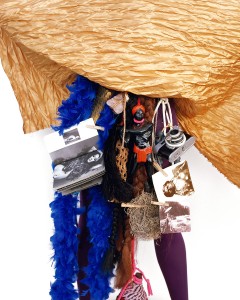 Light Work and Urban Video Project (UVP) are proud to present Accumulations and Number Sixteen, concurrent exhibitions featuring the work of Xaviera Simmons, whose multidisciplinary artistic practice includes photography, sculpture, installation, sound art, video, and performance. Number Sixteen will be on view at UVP’s Everson Museum facade venue from January 15 through January 31, and Accumulations will be on view at Light Work from January 12 through March 5, 2015.

Simmons will also be present for an informal gallery talk and reception at Light Work on Wednesday, January 28 from 5-7pm.

Both the artist talk and gallery talk & reception are FREE & OPEN to the public.

Simmons’ multidisciplinary work explores the sculptural and performative through a photographic lens. Simmons contextualizes her practice through her theatrical background, stating, “Great actors understand themselves. My work is about what brings me joy and breaks my heart.”

Number Sixteen is an hour-long, unedited video documenting a performance produced without an audience that engages endurance, abstraction and the energies beneath abstraction. In the video, a vocalist and performer work together in a studio space. The video’s audience becomes witness to a layered convergence: materials and texts, script and chance, sound and image, time and space, the body and its limits. Like the photographic and sculptural works in Accumulations, Number Sixteen reveals a complex network of accumulated inspirations, cultural allusions and visceral histories.

For more information about Accumulations, go to: lightwork.org