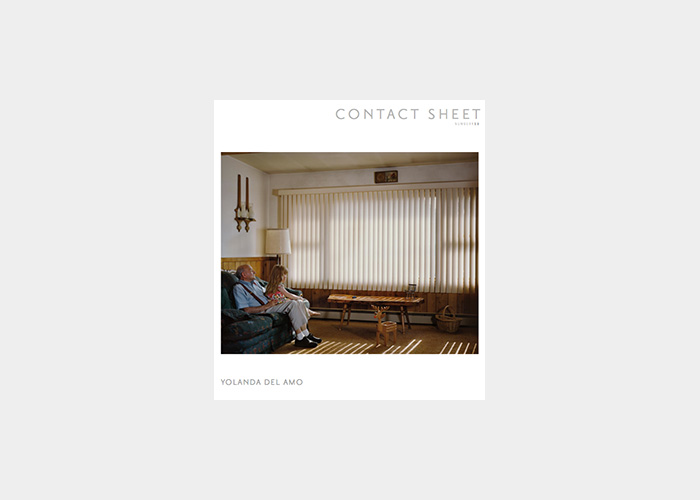 Artist Yolanda del Amo photographs family, friends, and acquaintances in various settings around the world as they perform scenes from a universal narrative about close human relationships.

To name her series, del Amo uses a metaphor that describes the turbulent nature of intimacy. Powerful forces deep below the surface of the earth form archipelagos, which are chains or clusters of individual islands. Concerned with the geography of human interaction, del Amo depicts the natural forces that lie just below the surface of relationships between people—their conflicting and ever-present needs for intimacy and connection, independence and individuality.

In Archipelago, these competing forces seem to have reached a temporary stasis that has driven del Amo’s subjects inward to their own thoughts and feelings. The people in the photographs appear completely submerged in their own inner worlds even when they are in the presence of others, in private rooms and public spaces. Rarely do the subjects look at each other or beyond the frame, and when they do, they stare past any potential audience toward a distant point of reference that may actually be within.

The artist leaves the relationships of her subjects to each other deliberately vague, which makes her images all the more far reaching. Each photograph represents a fragile time in any relationship when people—whether they are mothers and sons, brothers and sisters, husbands and wives, lovers, or simply friends—momentarily live alone, together.

Yolanda del Amo was born in Madrid and received a Bachelor and Master of Science in Mathematics from the Universität zu Köln, Cologne, Germany in 1993 and a Master of Fine Arts in Photography from the Rhode Island School of
Design in Providence in 2004.

Her work has been exhibited nationally and internationally in numerous venues, including the Hudson Franklin Gallery, New York City; the Barbara Walters Gallery at Sarah Lawrence College, Bronxville, NY; the Bronx Museum of the Arts, New York City; the National Portrait Gallery both in London and in Washington, DC; the Centro de Cultura Contemporánea, Barcelona, Spain; the Instituto Cervantes, New York City; and the Palais de Glace, Buenos Aires, Argentina.

She was a resident fellow at the Spanish Academy in Rome in 2010. Previous artist residencies include Light Work in Syracuse, NY; the Terra Foundation for American Art, Giverny, France; and the Lower Manhattan Culture Council, New York City. She received a commendation at the Outwin Boochever Portrait Competition 2009 organized by the National Portrait Gallery in Washington, DC. Previous awards include the second price at the Salón Nacional de las Artes Visuales in Argentina, and an Honorable Mention in the Competition for Visual Art at the Universidad Complutense in Madrid.

She is currently an assistant professor of photography and digital media at Ramapo College of New Jersey.