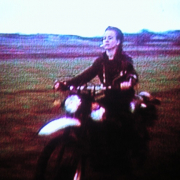 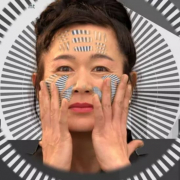 Strike is a short, humorous film squarely in the tradition of Fluxus performance and wordplay. The title of the work plays on the double meaning of the word “strike.” Most obviously, a strike is a physically violent gesture, in this case against a flatscreen monitor, both a highly fetishized commodity and an object that, when working, “disappears” behind the spectacle it presents. On the other hand, a strike is the strategic refusal to work. The double meaning here short circuits the two terminals of our contemporary split identity as consumer-workers.

In conjunction with the exhibition, UVP will host a screening of Steyerl’s essay films in collaboration with the Syracuse University College of Visual and Performing Arts Department of Transmedia on Tuesday, October 19.

We will also host a Zoom artist talk with Steyerl on Thursday, October 21. Both events are free and open to the public.

Strike continues Hito Steyerl’s interest in exploring and demystifying the production and circulation of images in late capitalism. In Strike, a monitor is smashed to reveal the outline of its matrix—in the artist’s words, “A sculptural take on what it can mean to take a look backstage.”

Hito Steyerl (born 1966 in Munich, Germany) is a filmmaker, visual artist, writer, and innovator of the essay documentary. Her prolific filmmaking and writing spans the fields of art, philosophy, and politics, constituting a deep exploration of late capitalism’s social, cultural, and financial imaginaries. Her solo exhibitions include Art Gallery of Ontario (Toronto), Art Institute of Chicago, Artists Space (New York City), E-flux (New York City), ICA (London), Museum of Contemporary Art (Chicago), Museum of Contemporary Art (Los Angeles), Park Avenue Armory (New York City), Serpentine Galleries (London), and The Institute of Contemporary Art (Boston). Her work appeared in the 58th, 56th, and 55th Venice Biennale as well as Documenta 12. She has published her writing extensively, most recently in Duty Free Art–Art in the Age of Planetary Civil Wars (London: Verso, 2017 / Zurich: Diaphanes, 2018). In 2017, Art Review listed her as the most influential person in the art world. She is Professor for Experimental Film and Video at the UdK–University of the Arts, Berlin, where she lives and works. Andrew Kreps Gallery in New York City represents her work.

Clifford Prince King: We Used to Lay Together