You are mine. I see now, I’m a have to let you go: Suné Woods, Fred Moten, and James Gordon Williams 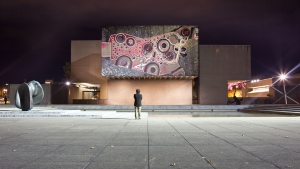 As part of the opening reception for Suné Woods: To Sleep With Terra  at Light Work’s Kathleen O. Ellis Gallery and the current exhibition Suné Woods: A Feeling Like Chaos at Light Work’s Urban Video Project, we invite gallery patrons to a special presentation on September 13 at 6:00 p.m. in Watson Theater.

Titled You are mine. I see now, I’m a have to let you go, this multimedia performance is infused with wordplay, musical improvisation, and moving images by Woods, award-winning poet Fred Moten, and Syracuse University professor and musicologist James Gordon Williams.

This collaboration was generously supported by Syracuse University’s Humanities Center and is part of the 2017-18 Syracuse Symposium: Belonging.

Fred Moten is Professor of English at the University of California, Riverside, where he teaches courses and conducts research in black studies, performance studies, poetics and literary theory. Moten is an educator, lecturer and conducts research in black performance and performance theory. A few of his illustrious publications include, In the Break: The Aesthetics of the Black Radical Tradition (University of Minnesota Press, 2003); The Little Edges (Wesleyan University Press, 2015), The Service Porch (Letter Machine Editions, 2016). His current project is called Hesitant Sociology: Blackness and Poetry.

James Gordon Williams is an American composer, improviser, pianist and critical musicologist. Williams has performed at music festivals in the United States, Malta, Switzerland, France, Italy and many of the well-known musical venues in the United States. A Yale Bouchet Scholar, Williams was a member of legendary drummer Charli Persips’ Supersound big band for several years. Williams has also performed with Association Advancement Creative Music (AACM) members Joseph Jarman and George E. Lewis. Williams is an alumnus of New England Conservatory of Music, New York University, and UC San Diego. Williams is Assistant Professor of Music in the Department of African American Studies at Syracuse University.

Suné Woods has participated in residencies at Headlands Center for the Arts, Vermont Studio Center, The Center for Photography at Woodstock, and Light Work in Syracuse. Woods is a recipient of the Visions from the New California initiative, The John Gutmann Fellowship Award, and The Baum Award for an Emerging American Photographer. Her work has been exhibited at the Brooklyn Museum of Art, The Lowe Art Museum, Miami; and The San Francisco Arts Commission Gallery. She received her MFA from California College of the Arts in 2010 and currently is Visiting Faculty at Vermont College of Fine Art.