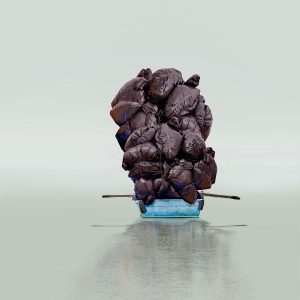 This short exhibition of selected video work by multimedia artist Mary Mattingly from her “Proposal” series is held in conjunction with her solo show,Mary Mattingly: Mass and Obstruction, at Light Work’s Kathleen O. Ellis Gallery January 19 – March 10, 2016. For more information on the exhibition, go to: lightwork.org

A special Wednesday-night screening at UVP Everson will take place on January 27 in celebration of the reception and gallery talk from 5 – 7pm with the artist at Light Work.

Through the building of ecosystems and mobile environments, Mattingly’s work explores issues of access to basic resources, supply and waste chains, and our shared present and future.

Absurdist and minimal, the short videos of the “Proposals” series presents a basic grammar of interaction between human bodies and the heterogeneous bodies of Mattingly’s signature bundled sculptures, which are simple shapes agglomerated in a complex network of twine binding together varied detritus of contemporary life – computer cables and Xerox copies; paint brushes and plumb bobs; plane tickets and pharmaceutical packaging.

Mary Mattingly is an artist based in New York. Her work has been exhibited at the Brooklyn Museum of Art, The Kitchen, Museo National de Belles Artes de la Habana, International Center of Photography, The Seoul Art Center, The Bronx Museum of the Arts, The New York Public Library, deCordova Museum and Sclupture Park, and The Palais de Tokyo. She participated in smARTpower, an initiative between the U.S. Department of State and the Bronx Museum of the Arts in the Philippines. She has been awarded grants and fellowships from the James L. Knight Foundation, A Blade of Grass, Eyebeam Center for Art and Technology, Yale University School of Art, The Harpo Foundation, NYFA, The Jerome Foundation, and The Art Matters Foundation. Her work has been featured in Aperture Magazine, Art in America, Artforum, Sculpture Magazine, The New York Times, New York Magazine, Le Monde Magazine, The New Yorker, The Wall Street Journal, on BBC News, MSNBC, Fox News, NPR, NBC, as well as on Art21’s “New York Close Up” series. Her work has been included in books such as the Whitechapel/MIT Press Documents of Contemporary Art series titled Nature, edited by Jeffrey Kastner, Triple Canopy’s Speculations, the Future Is… published by Artbook, and Henry Sayer’s A World of Art, 8th edition, published by Pearson Education Inc. Mattingly participated in Light Work’s Artist-in-Residence program in November 2014.

This exhibition will be the third installment of “We Were Never Human” a year-long program of exhibitions and events at Urban Video Project and partner organizations exploring the shifting idea of what it means to be human.

Screening + Q&A with Kodwo Eshun: The Radiant
Scroll to top