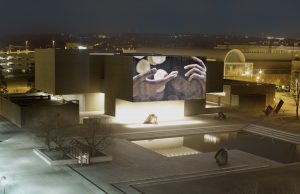 Join Light Work’s Urban Video Project for a special indoor screening of The Radiant(2012) by London-based collective, The Otolith Group, with live streaming Q&A with co-founding member Kodwo Eshun in the Everson Museum of Art’s Hosmer Auditorium at 6:30pm on Thursday, November 12.

This event will be free & open to the public. Reception follows.

The Radiant explores the aftermath of March 11, 2011, when the Tohoku earthquake triggered a tsunami that killed many thousands and caused the partial meltdown of the Fukushima Daiichi nuclear power plant on the east coast of Japan. A film essay burdened by the difficult task of representing the invisible aftermath of nuclear fallout, The Radiant travels through time and space to invoke the historical promises of nuclear energy and the threats of radiation that converge in Japan’s illuminated cities and evacuated villages in the months immediately following the disasters. More information

This is event is held in conjunction with the exhibition of Anathema at UVP Everson and is co-sponsored by the Syracuse University Humanities Center Syracuse Symposium.

To see the full program of events, go to: syracusehumanities.org