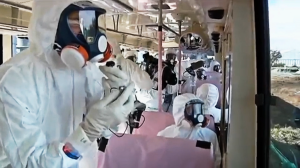 Light Work’s Urban Video Project (UVP) are pleased to announce the exhibition of Anathema by multimedia art collective The Otolith Group from November 5 – December 19, 2015. The exhibition will take place at UVP’s outdoor architectural projection venue at the Everson Museum of Art.

In conjunction with the exhibition, UVP will present a special indoor screening of The Radiant and co-founding member of The Otolith Group, Kodwo Eshun, will do a live streaming Q&A at the Everson Museum of Art’s Hosmer Auditorium on Thursday, November 12 at 6:30pm.

This exhibition will be the second installment of UVP 2015-16: We Were Never Human a year-long program of exhibitions and events at Urban Video Project and partner organizations exploring the shifting idea of what it means to be human.

Anathema is a contemporary Fantasia on the notion of the network and its inherent instability, where the organic networks of human relations and the crystalline lattices of silicon-based technologies intertwine, and often tangle. From the artists’ statement: Anathema re-imagines the microscopic behavior of liquid crystals undergoing turbulence as a sentient entity that possesses the fingertips and the eyes enthralled by the LCD touch-screens of communicative capitalism. Anathema can be understood as an object-oriented video that isolates and recombines the magical gestures of dream factory capitalism. By bringing the telecommunicating couplings of mother-father-daughter-son-machines and boyfriend-girlfriend-units into contact with the conductive imagery of liquid crystallization, Anathema proposes itself as a prototype for a counter-spell assembled from the possible worlds of capitalist sorcery.

Anjalika Sagar and Kodwo Eshun co-founded The Otolith Group in 2002. The work of The Otolith Group explores the moving image, the archive, the speculative, the sonic, and the aural within the context of a politics of exponentially increasing interconnectedness. Together, they have exhibited, screened, and curated at the British Museum and Tate Modern in London; REDCAT in Los Angeles; Haus der Kulturen der Welt in Berlin; and the Smithsonian Hirschorn Museum in Washington D.C.; and have participated in dOCUMENTA (13); the Sao Paulo Biennial; and MANIFESTA 8. Their work is in the collection of the Guggenheim Museum in NYC. In 2010, they were nominated for the prestigious Turner Prize.

For more information, go to: otolithgroup.org