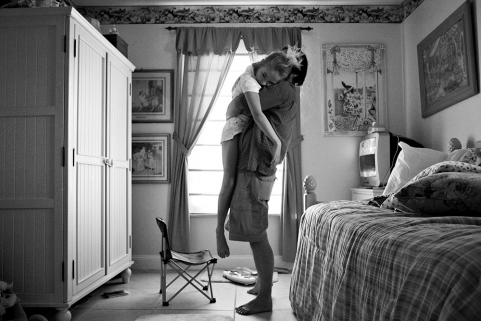 The Girl Next Door: Visiting Photographer’s Scoop on How She Finds Stories
By Lauren Cavalli

Adjectives. Adjectives and adverbs. When trying to capture a person’s character, professional documentary photographer Melissa Lyttle says to, “Ask people: How would you describe yourself to people who don’t know you?”

Then, she recommends trying to embody one of the adjectives or adverbs the person tells you with your camera.

Lyttle spoke to Syracuse University students and faculty at the Newhouse School while participating in the Fall Workshop, a four-day multimedia marathon where industry professionals mentored students in storytelling, Oct. 16 -19.

While working for the Tampa Bay Times as a staff photographer, Lyttle did a series called Dispatches from Next Door. Lyttle and a reporter showcased the lives of ordinary Floridians.

“Everybody has a story,” Lyttle said.

Inspired by National Geographic’s Zipcodes, a feature that shows people what different communities are like, Dispatches Next Door allowed Lyttle to dig deeper into the lives of people in her own community.

“I want to introduce people to their neighbors,” Lyttle said.

Lyttle sees stories everywhere. “Read the walls,” she suggested. A can at a convenience store counter asking for donations for two little girls’ lemonade stand, a flyer tacked to a bulletin board, the classifieds section of a newspaper, diners, community centers, all of these are places brimming with stories yet, to be explored.

Throughout Lyttle’s career, her earned reputation for photographing people with respect resulted in people reaching out to her and asking for her to cover stories. She ascribes this to her ability to photograph a subject with real understanding.

Once, Lyttle said, she received a call asking her to work on a story involving a feral child who had been neglected for the first seven years of her life by the people who were supposed to be her family. According to Lyttle’s website, the photo series and accompanying article received more responses from the public than any other story for the paper. Lyttle and Tampa Bay Times reporter Lane DeGregory were nominated for Pulitzer Prizes. DeGregory won the 2009 Pulitzer for Feature Writing.

As she spoke to the crowd at Newhouse about this shoot, and talked about the girl who had to learn what love is, Lyttle’s voice was filled with emotion. There was no questioning Lyttle’s passion for photography and her admiration for the resilience of people who may be living next door. Melissa Lyttle, from Dispatches From Next Door

On Being “The Photographer’s Wife,” an Interview With Laura...
Scroll to top