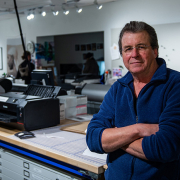 Over the past year there had been several significant leadership changes at Light Work. In January 2021 director Shane Lavalette left to start Assembly, a commercial venture, that supports artists through exhibitions, commissions, and publications. At that time, lab manager Dan Boardman was promoted to acting director, and after a national search, he was hired as Director in July 2021. When that transition was complete, executive director Jeffrey Hoone retired after 41 years in a leadership position at Light Work.

Boardman brings a wealth of experience and expertise to Light Work. An accomplished working artist, he was a Massachusetts Cultural Council Artist Fellow in 2013, and has exhibited his work widely, including at The Bakalar & Paine Galleries (Boston), Harvard University, and The Mills Gallery at The Boston Center for the Arts. Boardman was a Light Work artist-in-residence and also Light Work’s lab manager for several years. He and his wife, Coco, also a photographer, live outside Syracuse with their young son, Henry.

“Dan is the perfect pick to lead Light Work into the future,” says Jeff Hoone. “He understands the organization from an artists’ perspective and how to run a hands-on operation. His entrepreneurial instincts are excellent. He grasps the big picture goals of supporting emerging and underrecognized artists. I had the pleasure to mentor Dan as he stepped into this job―Light Work is fortunate to have such a competent, committed, and compassionate leader. I look forward to seeing how he builds on Light Work’s strong foundation.”

“Jeff Hoone’s impact on the field of photography is significant and far-reaching,” says Boardman. “His accomplishments measure beyond the scope of this statement, and will endure for decades to come.”

Jeffrey Hoone became assistant director of Light Work in 1980 and over the next two years worked with both founding co-directors, Phil Block and Tom Bryan, during a period of reorganization. Bryan left to become a full-time sheep farmer and Block moved to the International Center of Photography (ICP) in New York City. In 1982, Hoone became director and Light Work’s only full-time employee.

Over the next four years, Hoone and his work-study students expanded the artist-in-residence program to nearly 12 artists a year, making it Light Work’s signature program and defining the core mission to support artists in making new work. Emerging artists such as Dawoud Bey, Bill Burke, James Casebere, Barbara Ess, Melissa Shook, and Joel Sternfeld participated in these early years.

“My Light Work residency was the first I had ever done,” says Dawoud Bey. “The impact of that one month was considerable, leading to my inclusion in a major museum exhibition through the publication of my work in Contact Sheet. Light Work has provided immeasurable and constant support to those of us working in photography for decades now and Jeff Hoone has achieved a singular thing in building that organization.”

There are pivotal events for many organizations that help propel them forward. For Light Work it was being introduced to Robert B. Menschel. In the mid-80s, Hoone invited Mr. Menschel to meet in person and learn more about Light Work. Menschel was an alumnus and trustee of Syracuse University, a successful financier, and a photography collector. From that pivotal meeting came Menschel’s promise of a grant from the Horace W. Goldsmith Foundation so that Light Work could hire an assistant director. Menschel’s continued annual support has anchored Light Work’s financial success and stability.

There would never have been a Light Work without Jeff’s commitment and dedication,” says Menschel now. “His leadership created and sustained the longest-running photography publication. He will be sorely missed.

Under Hoone’s leadership Light Work completed a major $3.5 million renovation if its facility in 2001 and renamed the complex the Robert B. Menschel Media Center in gratitude for his generosity. Menschel also convinced noted architect Richard Meier to contribute design elements to the Center and was instrumental in artist and SU alum Sol LeWitt’s donation of a wall drawing for the building’s entrance. Hoone worked closely with Syracuse architect and SU alum Mike Wolniak to create an award-winning and highly functional creative space for artists.

In 2012, several years after completing the renovation of the Robert B. Menschel Media Center, Hoone personally established an endowment for the new main Gallery in the facility and named it after his mother Kathleen O. Ellis. The Ellis Gallery remains Light Work’s premiere Gallery and every exhibition is accompanied by an issue of Contact Sheet.

During his time in a leadership position at Light Work Hoone has kept the needs of artists front and center in Light Work’s priorities. Like many alternative arts organizations, Light Work began from an activist position to address inequities in how established institutions served artists as well as other larger social concerns of equity and inclusion. A priority during Hoone’s tenure has been Light Work’s commitment to diverse approaches to the medium and to welcome artists from all backgrounds, beliefs, and sexual orientations.

Hoone also expanded Light Work’s Contact Sheet from a small broadsheet to the full-color publication that today goes to more than 2,000 subscribers, institutions, artists, and art professionals in every state and 41 other countries. Contact Sheet receives support from Light Work’s subscription and fine print program and an enviable roster of support from national foundations, government agencies, and Syracuse University.

Since the 1970s, Light Work has asked visiting artists to contribute work made during their residency. . After many years these contributions had grown into an impressive collection and Hoone directed a decades-long process of cataloguing and storing the collection in order to meet industry standards. Over these decades, Light Work pioneered the creation of a searchable public image database that now holds more than 4,000 photographs and objects in the collection on the Light Work website. Light Work supported many artists early in their careers who have gone on to become important contributors to contemporary art. These include Andres Serrano, Fazal Sheikh, Cindy Sherman, Laurie Simmons, Hank Willis Thomas, Carrie Mae Weems, and James Welling, among many others.

Under Hoone’s leadership Light Work has been honored for its excellence and received top grants for many years from the New York State Council on the Arts (NYSCA), the National Endowment for the Arts (NEA), and several national foundations. He also helped to establish four endowment funds at Light Work totaling close to three-million dollars. These funds will provide stability for the organization as it moves into the future, and is a luxury that few small artist-run organizations can claim.

Hoone always had an eye on the big picture and when Nancy Cantor became chancellor of Syracuse University in 2004 Hoone worked with her to form the Coalition of Museum and Art Centers (CMAC) and became its first executive director. CMAC brought together the art centers and museums on campus and in the local community in collaboration to expand public awareness, understanding, appreciation, and involvement in the visual and electronic arts. At that time, Hoone became executive director of Light Work and Hannah Frieser joined the staff as director to handle day-to-day operations.

As CMAC’s executive director, Hoone created the University’s first official art museum by combining the University Art Collection with the Lowe Art Gallery to form the SUArt Galleries. Last year the trustees approved renaming SUArt as the Syracuse University Art Museum and museum accreditation is underway. Hoone led the search committee that hired Vanja Malloy as the new director and chief curator of the Museum.

Hoone had a great vision for the potential of the arts and turned a fledgling video program at the Connective Corridor into the Urban Video Project (UVP), an internationally acclaimed electronic public art project. Anneka Herre directs the UVP, which projects videos on the Everson Museum’s north façade. He also helped create a permanent home at the Cantor Warehouse for the Photography and Literacy (PAL) project started by the late Stephen Mahan, which teaches literacy skills to school children through photography. Located downtown, the Cantor Warehouse also currently houses CMAC’s Point of Contact Gallery along with other community art spaces.

Light Work is now preparing to celebrate its 50th anniversary in 2023 and Hoone anticipates spending time working with the Light Work staff on developing programs, events, and publications to celebrate that occasion. After 20 years on the board, Hoone also now serves as president of the foundation, Joy of Giving Something (JGS), which provides support to Light Work, UVP, the PAL project, and other photography organizations across the country to support emerging and under-recognized artists.

A working artist for much of his life, Hoone has exhibited his work extensively, served on peer review panels for the New York State Council on the Arts and the National Endowment for the Arts, and received a photography fellowship from the New York Foundation for the Arts. Hoone lives in Syracuse with his wife of 26 years, Carrie Mae Weems, who came to Light Work as a visiting artist in 1988. He will continue to work with her on the organization of her studio and as a board member of her non-profit organization, Social Studies 101.

In the end, Light Work’s most tremendous impact is on the artists,” says associate director Mary Lee Hodgens. “They always tell us what a pivotal time this was. We were just at the Armory show in New York City and several former AIRs came up to us. One had tears in their eyes and said, ’I was ready to give up when my residency came through.’