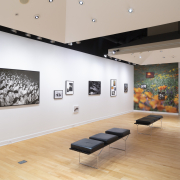 This review is written by Carl Mellor, a freelance writer. He covered visual arts for the Syracuse New Times from 1994 to June 2019. Mellor continues to write about exhibits and artists in the Syracuse, New York area.
—

The Lottery, Melissa Catanese’s solo exhibit in Light Work’s Kathleen O. Ellis Gallery, gathers together disparate and seemingly unrelated images from archival sources and the artist’s own work. Indeed, the show moves from a gray view of ocean waves to the striking color of poppy fields, from angry molten lava to a placid but ominous iceberg, from oil erupting from a derrick to rows of motor vehicles linked to no one.

Photos of humans also have no obvious connections at first glance. There are images of a man swimming furiously, of two men scaling a huge sand dune, of a crowd in the street celebrating the end of World War II, of a figure kneeling down by a prone individual. Perhaps he’s helping someone who fell from a bike or was injured during a sports event. We don’t know.

And yet, there’s no basis for assuming that the exhibition is focusing on life as random and absurd. Catanese is playing a very different game. She’s created a visual idiom to deal with a time of struggle and anxiety, a period of political strife, and an unprecedented environmental crisis. Global warming and climate change pose myriad threats: potential extinction of species including right whales, flooding of communities ranging from Pacific islands to New York City neighborhoods, and much more.

Catanese, for her part, isn’t erecting signposts listing reasons for alienation. Rather, her show hints, suggests, engages with the question of why so many people feel unhappy and confused. The images work together to influence viewers in a subtle way.

For sure, the show has key images that help develop central themes. Thus, a mushroom cloud speaks to nuclear weapons and the specter of nuclear war, while rocks speckled with gold color refer to radiation.

In addition, The Lottery delves into our relationship with nature. Various photos portray an active volcano and lightning strikes, as well as oceans, the primal source of all life on earth. One of the best images depicts a large rock situated on water, framed by shadows.

Elsewhere, two cormorants stand on land, not far from each other. They aren’t near the fish they feed on. And kelp washed ashore makes its own point. Kelp forests underwater trap and store carbon dioxide. It’s estimated that such forests are declining at two percent a year.

Certainly, the show communicates a sense of people struggling with isolation. We see a lone figure mountain climbing and another solitary individual running aimlessly on a rock formation near water. In a third photo, two people embrace, but we barely see their faces.

Yet another direction emerges in a large photo of a crowd packed into an auditorium. Although their faces are visible, few smile, many look as they would prefer to be elsewhere, and there’s a sense of unease and discomfort. This may not be a mob, but it’s painfully close. At the very least, there’s no sense of community.

Beyond that, the photographer took great care in organizing the portfolio of images that appears at Light Work. She mixes black-and-white and color photos, large and small prints, and images from various decades. On one wall, the photos begin at eye level and descend almost to the floor, influencing viewers to look up and down.

Catanese also builds physical energy into the exhibition. In many of the photos, something active is happening. The swimmer and the climber are in motion, a volcano has erupted, oil is propelled into the air.

Finally, the exhibit’s title relates directly to Shirley Jackson’s classic short story, The Lottery, in which a small community goes through a yearly ritual of selecting an individual and then stoning him or her to death. No one knows when or why the ritual began.

Clearly, Catanese is working in a different medium and living in a society quite different from the United States in the 1940s. However, she, like Jackson, is exploring culture, examining how influences direct and indirect impact our lives. That exploration requires a subtle grouping of images, an ability to play photos off each other, and confidence that viewers will respond to a singular type of exhibit. Catanese is up to the challenge, and the show is well worth extended viewing.