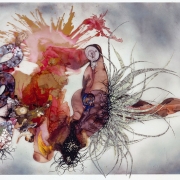 Light Work is pleased to present the second in a series of special posts from our affiliated program, Urban Video Project (UVP). UVP is a multi-media public art initiative of Light Work and Syracuse University, and an important international venue for the public presentation of video and electronic arts. Operating on the Connective Corridor cultural strip in Syracuse, NY, UVP’s flagship site UVP Everson features year-round, outdoor public projections onto the facade of the I.M. Pei designed Everson Museum of Art. UVP is one of few projects in the United States dedicated to continuous and ongoing video art projections. For more information about the Urban Video Project, please visit UVP’s website.

As the culminating event to its 2014-2015 curatorial program, Celestial Navigation: a year into the afro future, UVP will be presenting a full day of afro-future inspired and related events on April 7, 2015. These events include an artist lecture by Cauleen Smith; a workshop with Rasheeda Phillips; the Speculations performance, conversation, and screening; and the world premiere of Cauleen Smith: Crow Requiem. For more information, please visit urbanvideoproject.com.

Cauleen Smith: Crow Requiem will remain on view at UVP Everson from April 7 through May 30, 2015, screening every Thursday through Saturday from dusk until 11p.m.

Below, Tiffany E. Barber presents an excerpt from her unpublished essay, “Cyborg Grammar? Reading Wangechi Mutu’s Non je ne regrette rien through Kindred.” Barber’s essay will be included in the forthcoming book Afrofuturism 2.0: The Rise of Astroblackness, edited by Reynaldo Anderson and Charles Jones and published by Lexington Books.

Barber will be co-moderating the Speculations event with Jerome P. Dent and Anneka Herre at the Everson Museum of Art on April 7, 2015.

“A maimed figure – part human, part animal, part machine – is suspended in the middle of a grey and brown, cloud-like background. Severed from its upper half and projected into a cumulous abyss, only the lower limbs of the figure remain, separated like scissors. The bottom leg extends and the top leg bends at the knee, reaching upward like a scorpion’s tail or a morbidly elegant arabesque. Instead of a knee joint, the top leg is equipped with a motorcycle wheel that connects to spinal tubing. Green and grey-scaled tentacles cover its pelvic region. The right half of the picture plane is bisected by the figure’s bottom leg. Instead of a foot, the end of the leg is fitted with an amalgam of animal hoof, stiletto, and blooming flower. The left half of the picture plane is dominated by a coiling serpent whose skin is imbued with violet, red, and other earthen hues.[i]

The center of the image is the most visually arresting. Occupied by black root-like structures emerging from the figure’s lower excised torso, the grey background is spattered with colliding color fields of ochre, green, and pink spewing from the figure’s top leg from which its foot appears to have been violently amputated. The composition is arranged in such a way that it is hard to tell whether the coiling serpent is responsible for the figure’s ruptured state, or if the plant parts have caused the body to breach internally. The collage, Non je ne regrette rien (2007) by artist Wangechi Mutu, confronts the viewer with a complex scene that is repulsive yet seductively compelling, and the arrangement of human, animal, plant, and mechanical parts suggests a type of mutualism that results in a dismembered body. Known for her grotesque representations of black female bodies that exist between the cyborgian and the Afrofuturistic, Mutu’s Non je ne regrette rien offers a unique approach to black female subjecthood, what I call transgressive disfigurement.[ii] It pictures ways of being that are not predicated on wholeness but which instead incorporate alternate, at times violent or “undesirable” forms of transformation that serve to produce dismembered black female bodies.”

[i] Nicole R. Smith notes, “[M]uch of Mutu’s work[s] [. . .] often include a central female creature. Sometimes such figures are flanked by smaller and even more fantastical creatures—part fairy, puck, and insect. In some instances, they merely surround the main figure, while in others they take on a more sinister appearance, acting out in devilish ways” (Smith, “Wangechi Mutu: Feminist Collage and the Cyborg,” Art and Design Theses Paper 51 (2009), 13). A portion of the left side of the female figure in Non je ne regrette rien is flanked by a serpent. For the purposes of this essay, I focus on the central female figure in Non je ne regrette rien in order to underscore the intervention into representing black female bodies that my reading of Mutu’s collage makes.

[ii] A portion of this chapter was presented at the 35th Anniversary Conference of the Simone de Beauvoir Institute at Concordia University in April 2013 in Montréal, Québec. Special thanks to my colleague Rachel Zellars for the many conversations that helped me clarify this notion of “transgressive disfigurement.” Tiffany E. Barber is a scholar, curator, and writer of twentieth and twenty-first century visual art and performance with a focus on artists of the black diaspora living and working in the United States. Her essay on artist Wangechi Mutu and Octavia Butler’s 1979 novel Kindred is forthcoming in Afrofuturism 2.0: The Rise of Astroblackness (Lexington Books). 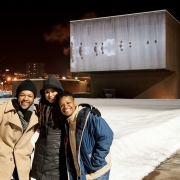