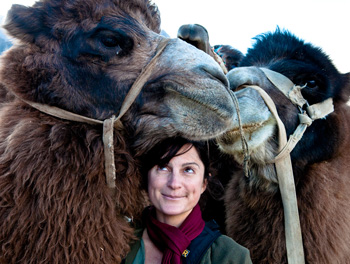 Travel Photography is Not About Travel
By Lauren Cavalli

“Do you have a moon in America?” asked Alio Balde, a young boy from Guinea Bissau, West Africa.

National Geographic photographer Ami Vitale said that this question has guided her approach to photography ever since. She was amazed that Alio, as he was saying goodbye to her and trying to imagine what her home in America was like, did not know whether Americans lived under the same sky. From that moment on Vitale decided she wanted to capture what it is we share as human beings instead of showcasing how we are all different. For Vitale we are all the same. We are all human.

“We are all so filled with ignorance, on all sides, and it’s so polarizing,” Vitale said. She gave advice to photographers during a talk at Syracuse University’s Newhouse School to a packed auditorium, Thursday, Oct. 16.  “Photographing and showing what is different about us is easy.”

In 2000, Vitale was awarded a grant from the Alexia Foundation, an institution that honors the death of Newhouse School student Alexia Tsairis, 20, who lost her life in the terrorist bombing of Pan Am Flight 103. The foundation provides grants and scholarships to photographers working toward exposing social injustices. The grant allowed Vitale to travel to Africa, where she lived for six months, and became friends with Alio Balde.

Vitale has traveled the world; she has photographed in 85 countries. Yet, she claims that travel photography is not about travel. “It’s about getting intimate with people,” Vitale said. “People are the story.”

She advised the audience to slow down when telling a story. “Sometimes the news industry just reacts then moves on, but to tell a good story you need time,” Vitale said.  “If you feel like an image is worth making, don’t be afraid to work for it.”

Vitale describes herself as introverted; the camera empowers her. “The attention is on other people, and it empowers them as well.”

Advice she gave to photographers included not being overwhelmed by all of the amazing technology. She noted that sometimes people let their gear get in the way and they end up missing a great moment unfolding before them.

If you are learning photography Vitale encouraged starting in your own backyard. “There are millions of stories that need to be told and they’re right outside your door.”

When traveling Vitale said that 99 percent of the time she is dealing with poor lighting, a problem almost every photographer is familiar with. Instead of fretting about not being able to control the light Vitale goes indoors to shoot. “When people take you inside of their own homes the interior landscapes can make great moments,” Vitale said.

When talking about safety, Vitale urged the audience to research a place thoroughly before traveling.  She emphasized the importance of establishing a contact in that country because it’s better to know someone who lives locally.  If you don’t have a contact, she suggested asking colleagues if they have any. Upon arriving, her first move is to meet the community leaders of an area. If you do this and explain to them what you are doing then you will be granted greater access into people’s lives.

“Photography shouldn’t always be about taking,” Vitale said. “It’s about giving back.” Vitale tries to always give gifts. Wherever she shoots she finds the closest one-hour photo shop and makes prints, then she runs around handing them out to the people she had photographed as a token of her appreciation and a memento from her visit.