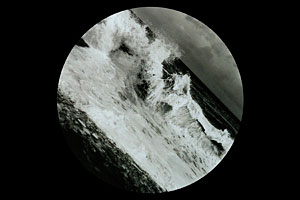 Light Work is pleased to announce the exhibition Penumbra, a suite of three video installations by Demetrius Oliver, which reconnects viewers to their place in the universe by playing with earthly and human forms against a backdrop of the cosmos. In Penumbra, explorations of light and scale, movement and the rhythm of the natural world suggest journeys both physical and metaphysical.

In Mare, a circular image of a wave crashes against an unnamed shore; the image spins within itself and simultaneously orbits the gallery. As the image rotates, the lines of the wave begin to resemble the layered surface of a Jovian planet such as Jupiter. Visitors to the gallery become part of the work as the projection reflects off their bodies. Joining the sea with both corporal and heavenly phenomena, the installation recreates the awe felt when looking at the night sky and the increasing smallness of human existence within the ever-expanding universe.

At the Everson Museum of Art Urban Video Project site, Oliver will install the workPerigee, which echoes the same circular image of a wave that appears in Mare. A perigee occurs when one orbiting body, in this case the moon, is closest to earth, which makes tidal waves generally stronger. The movement of the video describes the rotation of both planets and the alternate rising and falling of the sea. Its projection on the site, framed perfectly against the stars, transports the viewer into the celestial continuum where earth and its inhabitants are affected by larger bodies in space.

Penumbra, which will be installed in the Menschel Gallery at Schine Student Center, is a three-channel video in which Oliver’s head acts as a stellar body fading away as another body emerges to conceal it. The three videos play simultaneously, allowing Oliver to stretch time, the body, and space as the circle of his head becomes both a macrocosm of the universe and a microcosm of the body.

About the Artist
Demetrius Oliver lives and works in New York, NY. He received his BFA from the Rhode Island School of Design, Providence, RI and his MFA from the University of Pennsylvania, Philadelphia, PA , and attended the Skowhegan School of Painting and Sculpture, ME. From has participated in artist residencies at the Core Program, Museum of Fine Arts, Houston, TX and The Studio Museum in Harlem, New York, NY. Oliver was a Light Work Artist-in-Residence in 2009. His work has been exhibited widely, with recent solo exhibitions at Virginia Commonwealth University, Richmond, VA; Rhodes College, Memphis, TN; D’Amelio Terras, NY; the Atlanta Contemporary Art Center, GA; and The Contemporary Arts Museum, Houston. Most recently his workJupiter was installed on the Highline Gallery in New York City.

Also on view at this time is the Transmedia Photography Annual exhibition, featuring photographs by seniors in Syracuse University’s Department of Transmedia, part of the College of Visual and Performing Arts.

Gallery hours for these exhibitions are Sunday to Friday, 10am–6pm, and by appointment. To schedule an appointment, please call 315-443-1300. Both the exhibition and reception are free and open to the public. Paid parking is available in Booth Parking Garage.