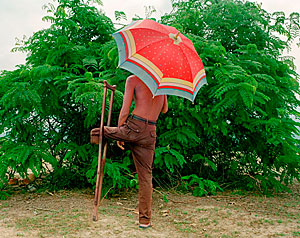 Light Work is pleased to invite you to view East of Eden: Vietnam featuring photographs by Pipo Nguyen-duy. These large-format color photographs bear witness to scars on the landscape and its people, caused by the Vietnam/American War.

To create East of Eden: Vietnam, Nguyen-duy traveled across Vietnam on a moped looking for war survivors—both afflicted civilians and amputee ex-combatants—and photographed them against the idyllic Southeast Asian landscape.

According to Sam Lee Gallery, “In East of Eden: Vietnam, Nguyen-duy has not veered far from his signature art practice, focusing on producing images that employ a blend of documentation and performance. Using the landscape as a post-apocalyptic ‘Eden,’ Nguyen-duy points out the horrific evidence of violent conflict and also focuses on the persistence of the human spirit. Each image conjures a narrative that hints at the past but also looks to the future.”

Pipo Nguyen-duy was born in Hue, Vietnam. Growing up within thirty kilometers of the Demilitarized Zone of the 18th Parallel, he describes hearing gunfire every day of his early life. In 1975 he immigrated to the United States as a political refugee. Nguyen-duy has taken on many things in life in pursuit of his diverse interests. As a teenager in Vietnam, he competed as a national athlete in table tennis. He also spent some time during the mid Eighties living as a Buddhist monk in Northern India. In 1983 he earned a BA in economics at Carleton College. He then moved to New York City where he worked as a bartender and later as a nightclub manager. While living in the East Village in the Eighties, or as Nguyen-duy describes, “the crux of creativity in New York,” and meeting people such as musician Don Cherry and artist Keith Haring, his interests turned to art. In 1992 he earned a MA in Photography, followed by a MFA in Photography in 1995, both from the University of New Mexico at Albuquerque. He participated in Light Work’s Artist-in-Residence Program in 2004 and was featured in an exhibition in the Light Work Main Gallery in 2006.

Light Work will feature a lecture by the artist on Wednesday, November 17 at 6:00pm. This exhibition and lecture are co-sponsored by the 2010 Syracuse Symposium and the Co-Curricular Fund from the Division of Student Affairs at Syracuse University.