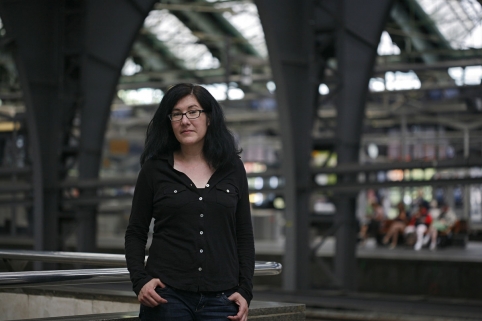 During her eight years with Light Work, many have been impacted by Hannah Frieser‘s generosity and commitment to the organization’s mission of supporting artists. On behalf of the staff, friends, and a host of artists, we want to say a warm thank you to Hannah for the energy she brought to Light Work, and wish her the best in her new pursuits. In the following interview, we catch up with Hannah from the road to hear about some of her fond memories, what she is currently working on, and what’s next. In your eight years with Light Work you worked with over 100 artists in the residency program alone. I’m sure there are many great memories looking back, but do you have a favorite?

I have countless fond memories of working with artists in the residency program. Few experiences are as inspiring as seeing artists get the support they deserve and letting them get to work. During my time at Light Work, the residency program brought a constant stream of fabulous artists to Syracuse, each with different projects and different needs. Every arrival would bring a new set of shared conversations, art discussions, soul searching, and good old fashion roll-up-your-sleeves art making.

I especially remember KayLynn Deveney’s last minute plea for help with her book project. Our residency program was already full, but the staff voted unanimously to help her out. She worked tirelessly, shifted from c-printing to digital prepress at record speed and in the end produced one of the most poetic books celebrating the quiet beauty of aging. Then there was Lucas Foglia, whom I met at an SPE conference where he showed me one astonishingly excellent series of work after another. At the time he was beginning the Rewilding series. During his residency Lucas created a tight edit for his photo series, which was then beautifully placed into context by Ariel Shanberg’s essay in The Light Work Annual 2008. Lucas has an unerring instinct to capture moments of human interaction in the perfect framework of color and composition. He is going to go far. Christian Patterson is another artist who comes to mind as someone we got to make a difference for at just the right time. Christian arrived at Light Work with an idea for a book. This turned into a hand-made edition created entirely in Syracuse, followed directly by a trade edition that is now in its third run. What a success story. Or the time Karen Miranda-Rivadeneira experienced a major set-back with her project and reinvented her residency on the spot to create brand new work. The resulting images are charismatic and refreshing – just as the artist – and they are sure to strike a cord when they appear in the next Light Work Annual with Elizabeth Ferrer’s thoughtful essay. And then there was the time when Elwira Jaglowska arrived at Light Work with a long laundry list of props she needed for her photo shoot. The staff immediately jumped into action and found every last item on her list, including rusty chains, an old guitar, dead fish, a tree (from my garden), a skull (from a local biologist, not my garden!), and more.

The list goes on and on, but one of my fondest recent highlights of the program was introducing John Chervinsky to Nathan Lyons to request some guidance for the sequencing of John’s first book project. Nathan gave John a quick overview into the art of editing a book sequence and then he took John through the process step by step. In closing Nathan turned things around and showed John his current project, explaining the sequencing as they looked at the book mock-up. So many special moments, and I could name so many more. Is there an exhibition or project you feel will always best represent your vision or curatorial voice in the medium?

Well, there are my two expanded exhibition projects that included lectures, billboards, and more. While working with Suzanne Opton during her residency, it became clear just how timely and relevant her photographs of soldiers from Fort Drum were. Considering the global impact of war, my thoughts were to develop an exhibition that would reach beyond the gallery walls. Suzanne and I came up with the idea for billboards as a means to get the images out into the world. I was able to raise the funds for the billboards and to invite Vicki Goldberg to give a lecture and write the essay for the catalogue. A few years later, I saw another opportunity for an expanded exhibition project with Barry Anderson. I wanted to show Barry’s video art as installations, rather than video panels on the wall. So I talked to many art organizations and different departments at Syracuse University about a citywide collaboration. In the end, the project included over a dozen exhibition venues, outdoor video projections, fifteen billboards and more. Instead of a postcard we printed a map to announce the exhibition and all its venues. The project is also an excellent example of the level of collaborations possible in Syracuse. Some ideas can also expand beyond the single exhibition. In 2006 I decided to create an exhibition with Pipo Nguyen-duy’s East of Eden series, most of which were photographed in the United States after 9/11. However I also really liked some of the newer images photographed for the series in Vietnam. The former stayed in the psychological realm of imminent danger, while the latter addressed recovery from unthinkable violence that has already occurred. In the end I decided to stick to my original idea, but to mention the new direction of his series in my introductory essay. A few years later I was able to invite Pipo back to Light Work as part of the 2010 Syracuse Symposium for the Syracuse University Humanities Center. We showed five of the Vietnam photographs in a smaller exhibition and flew Pipo in to give a lecture about the series in the context of the Symposium’s theme of “Conflict: Peace and War.” He has since received a Guggenheim Fellowship to continue the Vietnam images.

In the coming months or years do you plan to focus more on your own work as an artist?

I plan on spending more time on making art, but not exclusively. Currently I am doing general research for my next art projects, which I hope to work on intensively in the fall. My last big projects focused on cross-cultural heritage and Mexican-American identity. I have a number of artist books planned to continue the series, but I am also preparing for a related project on Little Mexico, a neighborhood of immigrant families that existed in Dallas through the 1980s. These ideas are developing on paper right now. Soon I’ll have time to put those ideas into action. It’s exciting to think about spending more time in art making again, but it will always be a balance with my curatorial and administrative work. I live in both worlds and one feeds the enthusiasm for the other. What projects are you working on now? What’s next?

I am working on multiple projects that I have been planning for some time, while also traveling to meet with curators and artists. I just wrapped up a 2,500 mile road trip by car through the US which included a stop in Houston for the opening of the Adam Magyar exhibition (Contact Sheet 170). Now I am in Europe doing the same by train. I already have plans to travel through Germany, Switzerland and France. And I am laying out plans for the next big leg of my adventures, to travel to Latin America later this year. Basically I am filling my head with art and meaningful exchanges, which will lead to a number of essays, lectures, and the launch of my curatorial research project which will showcase international art centers, their curators and their photographers. Along the way I am reviewing portfolios and jurying exhibitions.

It’s all been quite a whirlwind of new impressions. But I am about to lay low in Zürich for a while to work on two essays that will be published in late summer, sit on a jury for an exhibition on emerging European photographers, and remotely jury another competition in Latin America. A good friend helped me set up a blog before I left Syracuse, but I have yet to find time to add content. So maybe I will be able to do some writing for this as well. Then it is on to the Les Rencontres d’Arles festival in France and other projects after that. I expected things would slow down for me after I left Light Work, but the opposite has been true. I have kept extremely busy, and I continue to add new ideas to my red moleskine notebook. My list keeps growing.