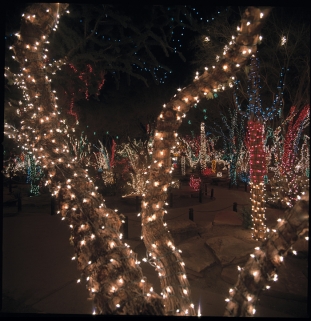 The 38th Annual Light Work Grants in Photography were recently awarded to three Central New York residents. The selected artists are Dennis Krukowski, Tice Lerner, and Sayler/Morris (the collaborative work of Susannah Sayler and Edward Morris). The Light Work Grants in Photography program is a part of Light Work’s ongoing effort to provide support and encouragement to artists, critics, and historians working in photography.

The Light Work Grant is a fellowship that includes a $2,000 cash award, an exhibition at Light Work, and publication in The Light Work Annual. Applicants were required to submit 10 examples of their work along with a short application form. Three judges from outside the grant area then selected the recipients based on the merits of their work. The judges were Jamie Allen (George Eastman House), Bleu Cease (Rochester Contemporary Art Center), and Sean Donaher (CEPA Gallery). Dennis Krukowski submitted work from a photographic series that captures decorated Christmas trees. He has been photographing the series since the late 1980s, and has created images throughout the United States, Canada, Mexico, Europe, and the Nordic lands. Krukowski also photographs interiors of homes, and those photographs have been published in many books and magazines. Krukowski’s work has been exhibited throughout New York State and is included in private collections. Tice Lerner received the Light Work Grant for his series Ever Onward, which chronicles his up-close and personal encounters with the inhabitants of Binghamton, NY. Once a prosperous manufacturing town for defense and the founding city of IBM, the area has long been economically depressed. At the time when Binghamton IBM was in its heyday, large companies were multigenerational employers that were, in Lerner’s words, “more like countries that corporations. “Binghamton IBMers” would show their pride by singing their corporate anthems daily–one of which was called Ever Onward. IBM, like the rest of these large companies, has long left Binghamton, leaving behind chemical spills and economic disparities. Sayler/Morris, the collaborative work of Susannah Sayler and Edward Morris, submitted a selection of work from their series A History of the Future. Their images from Peru represent a progression: mountains in the Andes, where much of Peru’s water is stored in glaciers; aqueducts carrying water from the mountains to the desert coast, where most of Peru’s population lives and works; urban sprawl outside of Lima that depends on the water. Scientists predict that the glaciers of the Andes will be completely melted by around 2030. While there is a narrative progression to the images, literally following the path of water, there is also a more basic underlying contrast between two scales of history: geologic history (the trace of glaciers in the striations on the stone, the path of rivers, etc.) and human history (technology, the structure of aqueducts, etc.). Sayler/Morris have been exhibited internationally, and are the co-founders of the non-profit The Canary Project.

The judges for the 2012 Light Work Grants competition were Jamie Allen, Bleu Cease, and Sean Donaher.

Jamie M. Allen is the assistant curator of photographs at George Eastman House, the oldest and largest museum of photography in the United States. Allen has curated or managed numerous exhibitions for Eastman House, including Between the States (2011), 60 from the 60s (2010), Portrait (2010), Roger Mertin’s Rochester (2009) and The Photograph Collection: An Introduction (2008). She holds a BAA in Art History and a BA in Photography from The University of Arizona, Tucson as well as a MA in Photographic Preservation and Collections Management from Ryerson University in Toronto, Ontario.

Bleu Cease currently serves as the executive director/curator of Rochester Contemporary Art Center (RoCo) in Rochester, NY. Since 2007 he has lead RoCo in its significant growth and curated numerous successful exhibitions. Cease is also involved with other art & cultural community building efforts including initiating and administering First Friday, Rochester’s Citywide Gallery night and serving on the board of trustees of the Landmark Society of Western New York. Bleu has worked as a museum professional, educator and curator since 2002. Cease holds a BA from Warren Wilson College in Asheville, NC and an MFA from the Visual Studies Workshop in Rochester, NY

Sean J. Donaher is the executive director & curator of CEPA Gallery in Buffalo, NY. One of the oldest photography galleries in the United States, CEPA is internationally known for programs in visual arts, and photo-based arts education. Donaher has also held the position of Executive Director/Curator of Big Orbit Gallery, Buffalo, NY since 1995. He has sat on a number of boards and panels including both the Arts Education Panel and the Visual Arts Panel at the New York State Council on the Arts, and has taught Graduate Seminar at the Visual Studies Department at the University at Buffalo.

SAVE 10% on Prints, Books and Subscriptions