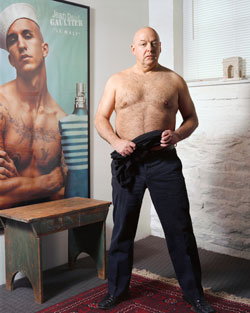 Nozlee Samadzadeh at The Morning News posted an insightful and in-depth interview with Chad States, who did a residency here at Light Work in June 2009. In the interview, titled “Men at Their Most Masculine,” Samadzadeh and an accompanying image gallery focus on States’s series of portraits and texts that seek the answer to the question, “Are you masculine?”

Later the same day, Jezebel ran an item on the interview and States’s work that has generated over 13,000 hits so far and a lively discussion on the definitions of masculinity and femininity in the comments section.

Read both sites for some interesting perspectives and commentary on this intriguing and beautiful series.

Intermissions gets under way