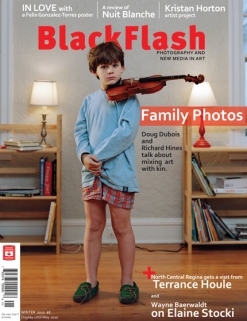 The Winter 2010 issue of BlackFlash magazine, entitled Family Matters, features an image by Doug DuBois on its cover. Inside, DuBois and Richard Hines talk about mixing art with family. Their conversation is also online here.

Doug DuBois has photographed his family for over twenty-five years, following the seasons of happy and sorrowful moments. His book …all the days and nights, which was published by aperture in 2009, features this and sixty-one other images in the series. photo-eye cited ...all the days and nights as one of the best books of 2009.

Your purchases go directly into supporting our programming for emerging and under-recognized artists.