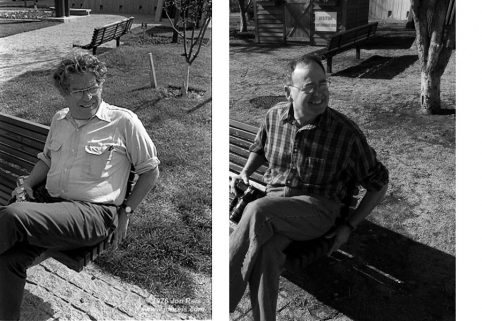 We received this wonderful email from Jon Reis this week about lessons learned from Garry Winogrand:

“I had an occasion to visit Rockport, Massachusetts, recently with my wife, Dede Hatch, who was delivering some artwork to a local gallery. I remembered that in 1976 when I was 27 years old I was in the same seaside town where I did an intensive week-long Garry Winogrand workshop. Then, the ten or twelve students all had their Leica’s in their hands and everyone wanted to watch him work the peak summer tourist onslaught. How DID he make such consistently interesting photos? . . . What was the secret to his vision?

One of the many truisms he spoke was to ‘shoot pictures that had not been made before.’ Garry used to say ‘If you seen a photo before, don’t take it again.’ Like the other students I snapped a few of Garry himself at rest not far from Rockport Motif #1. (Now that he is gone I wish I had shot more.)

At night during the photo critique of the day’s take one student asked ‘What made Atget such a great photographer?’ The wise-cracking Winogrand shot back, ‘Why, it is where he stood!’

Being in Rockport again 34 years later, I had fun recreating the pose with the help of Dede. Tree is doing well!” Jon’s exhibition, By the Way: Two Decades of America Observed 1973-1993, is on view at the Robert B. Menschel Photography Gallery at Syracuse University until December 2010. His generous gifts to the Light Work Collection include over 100 pieces.