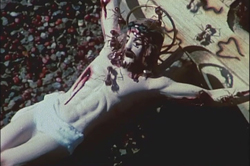 We look forward to hosting a lecture tonight by Jonathan Katz, co-curator of the ground-breaking Smithsonian National Portrait Gallery exhibition Hide/Seek: Difference and Desire in American Portraiture. If you are in the Central New York area, this is a not-to-miss event. Katz will deliver a presentation about his experiences with curating the exhibition, which is the first by a major museum to focus on sexual difference in the creation of modern American portraiture. He will also speak about the censoring of David Wojnarowicz’s video A Fire in My Belly from the exhibition. The work was removed from the exhibition by the secretary of the Smithsonian Institution, G. Wayne Clough, after pressure was exerted to remove it by William Donohue, president of the Catholic League, and by Congressional conservatives including Republican Speak of the House John Boehner and Republican Majority Leader Eric Cantor.

The removal of A Fire in My Belly seriously undermined the credibility and institutional autonomy of the Smithsonian. More importantly, it was a blatant act of censorship by those who seek to stifle free speech and the First Amendment in this country. Ever since the removal of A Fire in My Belly from the National Portrait Gallery, institutions large and small across America have staged screenings and lectures to create and maintain an open dialog about the work itself and what it means to everyone’s rights when one artist is censored due to the criticisms of special interest groups.

Katz’s lecture tonight at Light Work, entitled Ending the Loud Silence: Hide/Seek the Future of Queer Exhibitions and Freedom of Speech, will be the latest step in keeping these critical issues alive in the national dialog. Visit hideseek.org to read a list of current, past, and upcoming events in support of Wojnarowicz, openness in cultural debate, and the First Amendment.