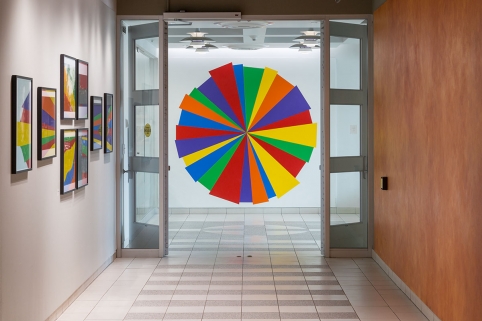 Light Work announces its 2021 Fall exhibitions, which will occupy its two galleries and outdoor architectural projection site, Urban Video Project. Light Work annually presents a rotating schedule of exhibitions by emerging and previously excluded artists working in photography and digital imaging. Works appearing in our Kathleen O. Ellis and Hallway Galleries, and at UVP’s site on the Everson Museum of Art’s north facade, represent artists working at the forefront of lens-based practices in a wide variety of subjects. After closing our gallery doors to the public on March 13, 2020, and shifting programming to virtual platforms, we’re thrilled to reopen and welcome patrons back in person into our exhibition spaces for gallery openings, artist talks, and curator conversations. As Light Work approaches our fiftieth anniversary, we will continue our core mission of support to artists through exhibitions, residencies, and the production of the award-winning Contact Sheet publication.

Clifford Prince King We Used to Lay Together

In Kathleen O. Ellis Gallery, the fall season begins with We Used to Lay Together, an exhibition from Los Angeles-based photographer Clifford Prince King. A self-taught queer Black artist, King uses his life and experiences as starting points to explore desire, intimacy, and daily life. He often depicts himself and others within the beige domestic spaces common to LA. We see a brotherhood of men enacting moments of domestic bliss, nude bodies in the moments before or after a sexual encounter, and the daily routine and side effects of living with HIV. King’s colorful images show us the casual intimacy of his life in Los Angeles. It has been a joy for us at Light Work to learn about his approach, influences, and experience as we have collaborated on curating this exhibition. As his community confronts erasure and heteronormative flattening of their identity, we’re excited to share this insider’s intentional gaze.

The King exhibition runs from Monday, August 23 through Thursday, October 14, 2021. Reception for King and his artist’s gallery talk on Thursday, September 16, at 6 p.m. in the Kathleen O. Ellis Gallery.

Queer Moments remains on view in the Hallway Gallery from August 23 through October 2021.

Light Work’s Urban Video Project will screen film shorts from 2021 Horizons: New Film Out of Central New York award recipients as part of a continued commitment to collaboration with regional partners. The CNY Short Film Competition is a juried program administered by the Innovation Group of CNY Arts, which supports promising young filmmakers who have recently graduated from an accredited film or media program in the Central New York region. By drawing upon the region’s unique cultural and geographic characteristics, winning filmmakers explore a wide variety of storytelling perspectives.

The one-night screening will be on the run Friday, October 1, at UVP’s outdoor projection site on the north facade of the Everson Museum of Art at 401 Harrison Street, Thursday through Saturday, from dusk until 9 p.m.

Urban Video Project’s program year continues with world-renowned artist Hito Steyerl’s Strike (2010). Steyerl’s work explores late capitalism’s social, cultural, and financial imaginaries. Strike is a short, humorous film squarely in the tradition of Fluxus performance and wordplay. The title of the work plays on the double meaning of the word “strike.” Most obviously, a strike is a physically violent gesture, in this case against a flatscreen monitor, both a commodity and an object that, when working, “disappears” behind the spectacle it presents. On the other hand, a strike is a strategic refusal to work. The double meaning here short circuits our contemporary split identity as consumer-workers.

Strike will be on view September 16 thru December 11, 2021, at UVP’s outdoor projection site on the north facade of the Everson Museum of Art at 401 Harrison Street, Thursday through Saturday, from dusk until 11 p.m.

image: Installation view of Strike projected on the facade of the Everson Museum