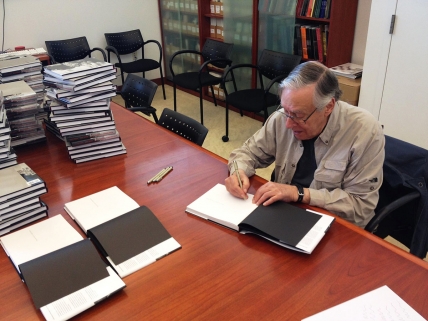 It is with great sadness that we share the news of the death of Nathan Lyons. Nathan passed away last night in Rochester, NY at the age of 86.

It’s difficult to sum up the life and contributions of a visionary like Nathan. He began many important conversations about the medium of photography at a time where they were begging to happen, and helped to plant the seeds that would grow to be the gathering places for further dialogue: Society for Photographic Education (SPE), Visual Studies Workshop (VSW), and Oracle. Nathan was a pioneering curator, educator, author, and arts administrator. He served as Associate Director and Curator of Photography at George Eastman House during the 1960s. He was a founding trustee of the New York Foundation for the Arts (NYFA) and served as chair from 1976 to 1993. He received several honors from the National Endowment for the Arts (NEA), was a visiting professor at MIT, a member of the George Eastman House acquisitions committee, and held an honorary doctorate in fine arts from Corcoran School of Art.

Nathan supported the work of countless image-makers over the span of his career, and was a photographic artist in his own right. He is best known for a lifelong trilogy of publications that are sequenced images of the urban landscape. His photographs are formal, thoughtful, striking, political, and personal. Nathan was a great friend and supporter of Light Work for many years as well. His work was featured in Contact Sheet 35 in 1983 alongside the work of other artists including Frank Golke, Barbara Kruger, Sherrie Levine, Richard Prince, and more. Twenty years later, Contact Sheet 123: Nathan Lyons would accompany his 2003 exhibition After 9/11. His 2004 Fine Print Program print entirely sold out. Most recently, Nathan’s book Return Your Mind to Its Upright Position was featured as part of our annual Subscription Program.

Nathan Lyons was a true renaissance man in photography — artist, author, curator, historian, educator, archivist, activist, mentor, and friend. He will be greatly missed. Our hearts go out to his family and friends, and everyone that has had the pleasure of crossing paths with him.

Image: Nathan Lyons at Light Work signing copies of Return Your Mind to its Upright Position, August 29, 2014. Get a signed copy of the book here.