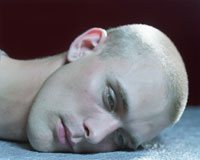 Images from Suzanne Opton’s series Soldier will appear on billboards in six Metrorail stations throughout Washington D.C. from March 9 to April 4, 2010.

The Soldier Billboard Project features portraits of American soldiers between tours of duty in Iraq and Afghanistan. Click here to read about various reactions to the series, which has been on a two-year tour to cities including Denver, Houston, Atlanta, and Miami, among others.

The series has generated considerable controversy in some venues, including CBS Outdoor’s decision to pull Opton’s billboards in Minneapolis-St. Paul during the Republican National Convention there in 2008.

Light Work has enjoyed working with Opton since 2005 when she was an Artist-in-Residence here in Syracuse. Light Work held the exhibition Soldier in 2006. As part of the exhibition, images from the series appeared on five billboards throughout Syracuse, which extended the work into the community where it could be seen by the general public. Contact Sheet 136 celebrates the series and the exhibition. Opton continues to work with Light Work/Community Darkrooms by realizing prints with Digital Lab Manager John Mannion and his assistant Carrie Mondore up through today.

Three works from Solider are in the Light Work Collection, which you can view and read about here. A black-and-white image from this series, Soldier Conklin: 272 days in Iraq, 2006, is also available in the Light Work store; your purchase goes directly back into our programming that supports emerging and under-recognized artists.

Images: Above, left: Soldier Birkholz, 353 Days in Iraq, 205 Days in Afghanistan. Right: Billboards in Syracuse initiated by Light Work in conjunction with the exhibition Soldier, 2006.

Renée Mussai of Autograph ABP to lecture at Light Work

Karen Halverson—Downstream: Encounters with the Colorado River
Scroll to top