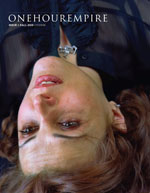 The two photographic series Soldier and Citizen by Suzanne Opton are near and dear to us. We have watched the projects grow from Suzanne’s earliest images taken at Fort Drum. We were able to support Suzanne by inviting her to participate in our Artist-in-Residence in 2005. We then curated an exhibition with the Soldier series, and with the support of the Central New York Community Foundation were able to include billboards and lectures.

Years later and the work is still as timely as ever. The photographs that began as a quiet exploration of soldiers have grown into many exhibitions and have inspired many essays and news reports. The premier issue of One Hour Empire magazine features Suzanne’s photographs with an essay by Andrea Fitzpatrick. The online magazine Visura features a portfolio of Suzanne’s work. Her images can currently be seen in exhibitions at the Brooklyn Museum in NY. Soon additional exhibitions will be featured by the Red Cross Museum in Geneva, the Casino Luxembourg Forum d’art contemporain, Yale University Art Gallery, and the Washington Project for the Arts. The Soldier Billboard Project made national news with its multiple billboards that were placed around the country during election season. It just received additional funding for three additional billboards through the Nathan Cummings Foundation. Congratulations, Suzanne. We could not be prouder.