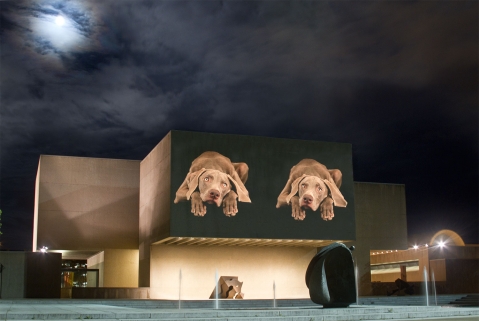 Light Work is pleased to announce the Urban Video Project‘s collaboration with the Everson Museum of Art to realize a new video piece by artist William Wegman.

The video, “Flo Flow” (2011), is Wegman’s latest in a long line of human-canid collaborations. It was while he was in Long Beach in the 1970′s that Wegman got his dog, Man Ray, with whom he began a fruitful collaboration of many years. Man Ray, known in the art world and beyond for his endearing deadpan presence, became a central figure in Wegman’s photographs and videotapes. Ever since, Weimaraner-actors have peopled Wegman’s uncanny imaginative universe, a reflection on both the human-ness of ‘animals’ and the strangeness of humans.