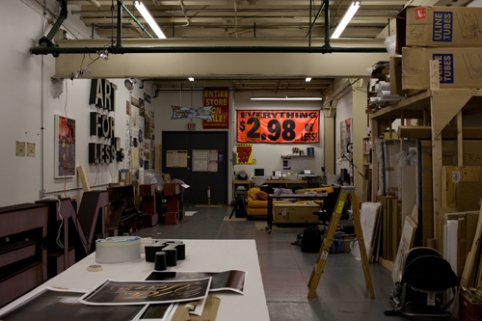 Since we’re in Chicago for the art fair, we’re bringing you all things Windy City for the week. Enjoy this virtual tour of Brian Ulrich’s studio. And then make sure to come visit us in Booth 12-266 at Art Chicago!

A few years ago I had a studio live/work space down in the Pilsen area of Chicago. It was a great place with good light and plenty of space. After some time I came to the conclusion that having my work several feet from my bed was not necessarily a productive thing. It was all too easy to continue working late into the evening, wake up, crawl back to the computer and pick up where I left off. Continuing on this path seemed a one-way street that was not going to lead to healthy living.

I found a smaller but nice space on the North side of Chicago in an area called Andersonville. This was a large converted factory building in a beautiful area near the Metra train. It was a bit strange walking by the small start-up businesses with their doors open in the morning (seemingly waiting for clients) but the change to have work to show up for and a home to return to in the evening was a welcome change.

Late last year, with many of my recent forays into collecting signage and retail artifacts, I was beginning to simply run out of space. After some looking I found a space nearly three times bigger than the Andersonville one for a small amount more per month. In order to store my framed works I had to rent a small storage unit; I was able to end that expense as well with the new bigger space. My studio assistant Jeffrey Brandsted and I did a fair job getting organized. Building a storage rack for the framed works, keeping the table movable to accommodate special projects. There is always the random last minute shipping container that needs to be built or a sign to disassemble, clean, and trace for new neon, mounts or whatnot. This is the first space that allows me to have the opportunity to indulge a bit more. Specifically when I’m out photographing or collecting, I don’t have to be hampered by the fact that I simply won’t have space for an object. I can bring something back to the studio and then decide. Making lots of photographs leads one to remind oneself to trust the inclination to take a certain picture. The same goes for some of the objects. If there is a curiosity there, follow it. Art For Less #5 signage without plastic covers, being mocked up and testing power supplies. In foreground is recent rescue of Cinema sign. Currently I work with Jeff and my SAIC co-op intern Claire Demos. It’s quite amazing to have people around to help and share ideas. I do my best not to take that for granted, and Claire and I have many talks and have made occasional trips for her work which is really making strides. Over the years I’ve been incredibly lucky to have some great people work with me.

I also couldn’t do without my two Scanmate Drum Scanners, 1 Epson 9900, 1 Epson r2400, Shop vac, Coffee Maker, mini fridge (stocked with out dated film, hummus, and half and half), ladders, books, books, and books. Bookshelf with archived negatives, Ear Piercing sign, retro Polaroid camera, Montgomery Ward door pulls, photograph of Jon Gitelson as a pre-teen with inscription “Have a Great Summer, See You At the Pool”, books and publications, custom lamp given as gift from Clevelandart. — Brian Ulrich

Brian Ulrich has spent the last decade researching and shooting the images in Copia, a series for which he won a John Simon Guggenheim Memorial Fellowship in 2009. Ulrich has exhibited his work at many venues, most recently at Robert Koch Gallery in San Francsico; Julie Saul Gallery, New York City; and the FotoFest Biennial in Houston, Texas. While not traveling the country making work, Ulrich teaches part time at the School of the Art Institute of Chicago. Read more about Brian Ulrich and his work at his website.

See you in Chicago

Thanks Chicago!
Scroll to top