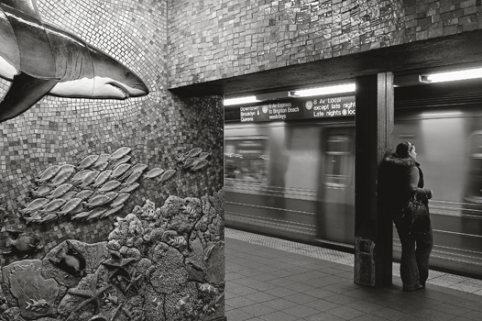 Light Work is pleased to announce the exhibition That Year of Living featuring stunning black-and-white photographs by Jeffrey Henson Scales. Diagnosed with cancer in 2008, Scales was forced to, in his words, weigh the possibilities of his own demise, and whether he had achieved what he felt he was put here to do. It was this diagnosis and contemplation, along with the urging of his wife, Meg Henson Scales, which led him to return to making photographs on a daily basis.

The images in That Year of Living were made in the year following his cancer diagnosis and surgery. Scales photographed mainly in and around Times Square, depicting the part of New York City that he visited every day going to and from work at The New York Times. The images capture the certain hardness mixed with joy, sadness, determination, and bewilderment that is found in the faces of young and old alike in New York City. Created in the months following his own experience with mortality, the photographs explore the journey of life and death found in the faces on the streets of New York.

According to Scales, “I believe the world outside is never a static experience. Life on the street in New York City is always changing and I have and always will love to see what it looks like, photographed. I never bore of the state of contemporary life as it is reflected in the faces of people, the states of nature, the stuff of life itself. As such, I hope to always be making photographs of this thing: life—even when it transmogrifies into its natural endpoint.”

About the Artist
Scales has spent more than forty years as a documentary photographer. His work has been exhibited internationally, and has appeared in numerous photography books, magazines, and anthologies. His work is included in the permanent collections of The Museum of Modern Art, the George Eastman House, and the Baltimore Museum of Art. Scales has been a photography editor for The New York Times since 1998, editing The Week in Review, The Book Review, and co- editing The Year in Pictures. He is also an adjunct professor at the Tisch School of the Arts of New York University. He and his wife own the Harlem-based photo archive, HSP Archive, and the multimedia production company, Henson Scales Productions. His work can be viewed atwww.jeffreyscales.com.

Also on view at this time is Canaries, an exhibition of photographs by Thilde Jensen. The images in this exhibition are a personal account of the life Jensen has lived with Multiple Chemical Sensitivity, and the people she has met who suffer the same condition. People with this sensitivity have been dubbed “human canaries,” and they are the casualties of what Jensen calls a “ubiquitous synthetic chemical culture.” Jensen became so sensitive to chemicals in the air that she could not sit in traffic, read a book, or sit next to someone wearing perfume. She was forced to wear a gas mask when entering banks, supermarkets, and doctor’s offices. She left her life in New York City, her husband and her career, and moved to the country where she lived in a tent away from the regular chemicals such as laundry detergents, pesticides, and exhaust fumes.

Gallery hours for these exhibitions are Sunday to Friday, 10am-6pm, and by appointment. To schedule an appointment, please call 315-443-1300. Both the exhibition and reception are free and open to the public. Paid parking is available in Booth Parking Garage.