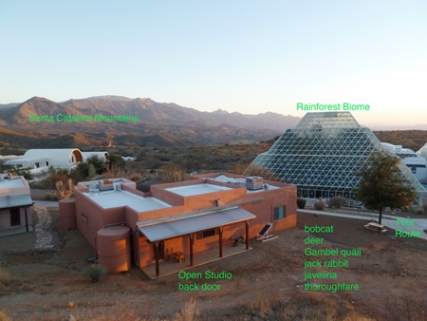 Judy Natal will visit the Light Work booth during Art Chicago, held this year April 29-May 2, 2011, to talk about her work and sign copies of Contact Sheet 126. Stay tuned for more information on that event, and in the meantime, get to know Natal by reading this story about her experience running an Open Studio at Biosphere 2.

From November 1, 2010 to March 1, 2011, I created an Open Studio at the Biosphere 2 in Oracle, Arizona. I have been working at the Biosphere 2 on and off since I first set eyes on the place as a tourist taking a guided tour while attending a friend’s wedding in Tucson in June 2007. It was love at first sight! It is such a spectacularly peculiar place with a sordid past and a present and future of enormous promise where BIG science is now taking place, particularly around the issues of water. Which makes sense, when you consider that it is nestled in the beautiful Canyon del Oro, in the foothills of the Santa Catalina Mountains on the edge of the great Sonoran Desert. The Biospherians created Biosphere 2 to explore space colonization. It was an enormous engineering feat, with five ecosystems under 66,000 panes of glass, and eight humans (with all the accompanying psycho-drama) sealed within the airtight facility for two years between 1991-1993. (See Biospherian Jayne Poynter’s account in her book The Human Experiment. It’s a page turner!). All the while, growing their own food, filtering their own waste and water, and orchestrating five ecosystems.

At the time of my visit, I had begun what has now become a four-year project, Future Perfect, that entails a photographic sweep of three peculiarly evocative sites where human intervention and land use are exploring the quality and state of futurity, illuminating the present moment and the choices we have yet to make.

Immediately upon my return from visiting Tucson and Biosphere 2, I proposed an artist residency there, and I have been working with Biosphere 2 ever since in a mutually beneficial relationship, helping to establish a residency program in 2008.

When I arrived at Biosphere 2 in November 2010, I knew my time was going to be different. Unlike my previous residencies at Biosphere 2, when I was in the field photographing every minute possible, I now had the intention of setting up an Open Studio, with an expectation of proofing, printing, editing, and sequencing the hundreds of photographs that I had made to date, with the goal of printing the work for exhibition and publication. With this realization, I proposed opening up my art practice to the hundreds of visitors who come to Biosphere 2 seven days a week. The B2 Institute Director Pierre Meystre, who I developed and enjoyed a supportive relationship with (this is key!), gave his enthusiastic support to my proposal, which placed a public face on the artist residency program. The interaction with the general public was enlightening and helped me hone my ability to speak about my new body of work. It also facilitated an ongoing dialogue about imagining the future, which was a primary goal for the project.

Immediately upon my arrival, I ordered wallboards that the maintenance staff helped me paint and install in the casita where I stayed. Within a day and a half of my arrival, the wallboards were up, prints were pinned to the wall, the two inkjet printers I brought with me were plugged in, the door was open (it’s winter in Arizona after all), and a sign welcoming Biosphere 2 visitors was up. The ensuing four months were a gift, a unique opportunity, and a challenge. I began a series of photographic portraits of people who visited the Open Studio, which included staff, students, tour guides, and visitors from every walk of life. Nobel laureate scientists, poets, artists, photographers, writers, grad and under grad students, faculty, research assistants, engineers, k-12 classes, the American Boys Choir (accompanied by a brief concert), even one of my own students from Columbia College visited. I also created a new body of work, now a limited edition portfolio of 35 prints, entitled Astral Projections, inspired by the writings of the renown biologist Edward O. Wilson, on the loss of biodiversity and animal extinction. This work was playful and full of color, and it relieved the tedium of proofing and printing.

The interruptions that happen at an Open Studio did take some getting used to, and I did feel like a bit of a broken record as I explained my work for each tour cycle. But I was surprisingly rewarded by the interactions, and I simply pulled my sign in when I needed a break. By 5pm, when the tours finished for the day, a beautiful calm, not to mention spectacular sunsets, descended on Biosphere 2, the only place of its kind, and what Life magazine called “one of the contemporary wonders” in the world. I am quite a solitary creature while I’m photographing and working, so this was a new experience for me. It was incredibly rich, endlessly surprising, and has me thinking about how I can do this in my studio in Chicago. I invite you to try it! —Judy Natal Judy Natal was an Artist-in-Residence at Light Work in 2003, and her work was featured in an exhibition in the Light Work Main Gallery in 2004. Natal is a professor of photography at Columbia College in Chicago. Her work is the collection of institutions including the California Museum of Photography, Center for Creative Photography, and the Museum of Contemporary Photography, among many others. Her work has been exhibited at Projects International, The Nelson-Atkins Museum, and the Sao Paulo Biennial, among other venues.

Thilde Jensen speaks about art and illness
Scroll to top